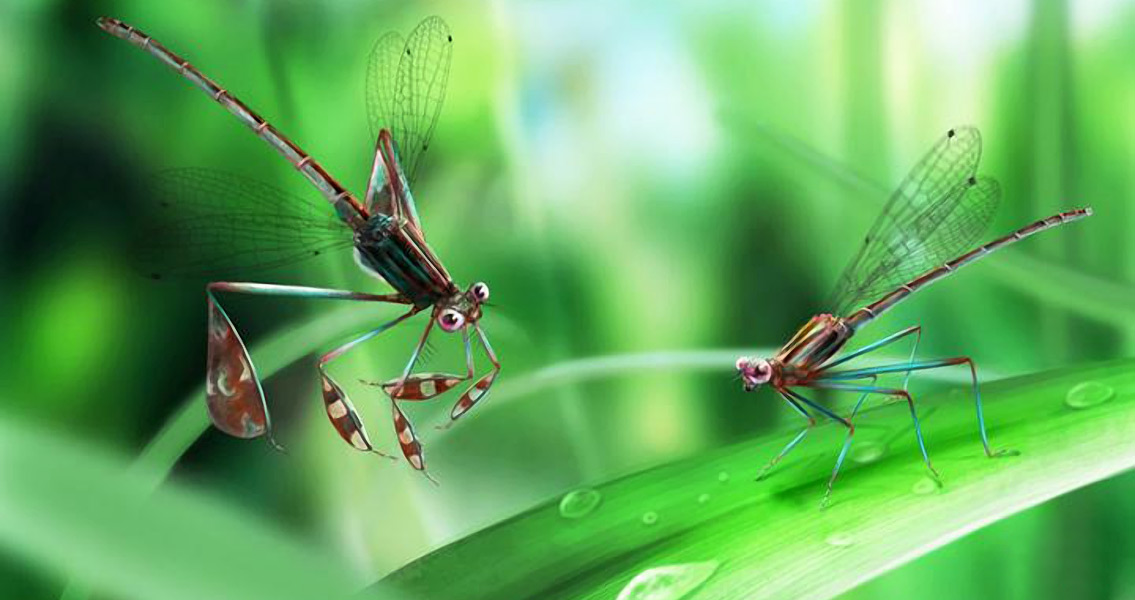 Yijenplatycnemis huangi in honor of the donor of the amber, Huang Yijen from Taiwan. The preserved Y. huangi specimens showcased large, expanded pod-like forelegs that would have improved chances of mating successfully by both attracting females as well as helping to fend off other suitors. These characteristics are commonly found in similar modern insects, the most common being the male Platycypha caligata damselfly found in Africa, who use their enlarged forelegs in an almost identical manner. East Asian damselfly species also exhibit similar traits as well, including feather-like legs that are only apparent in males. These modern East Asian damselfly males put on a display with their legs in front of females, and Dr. Zheng and Professor Wang believe the legs of Y. huangi would have been used in a similar manner. The fossil specimens have legs that are much more expanded than any other modern damselfly species, which could be an indication that Y. huangi’s forelegs were an extreme adaptation for courtship behavior. The excessively large forelegs of Y. huangi could have also played other crucial roles – both making males more easily noticeable by females of the species and also in warding off predators. The researchers say that Y. huangi’s forelegs were so large that they would have moved slower due to air resistance, attracting female attention more efficiently and increasing mating opportunities. Meanwhile, the pod-like shape and coloration of the ancient damselfly’s legs could have been used to distract or intimidate predators. The pigmentation of the legs, which are partially covered with a pair of brown bands and feature an eye-shaped spot, are similar to the wing spots on some modern butterfly species. These wing spots were also present on a species of extinct lacewings from the Early Middle Cretaceous. Dr. Zheng and Prof. Wang state in their study that the spots on Y. huangi’s legs were likely too small to do much in the way of deflecting predators. Instead, these dots may have been more similar to the “eyespots” on peacock feathers, providing yet another way to garner the attention of the females of the species. The research paper, recently published in the journal Scientific Reports, can be found here Image courtesy of Image by YANG Dinghua]]>