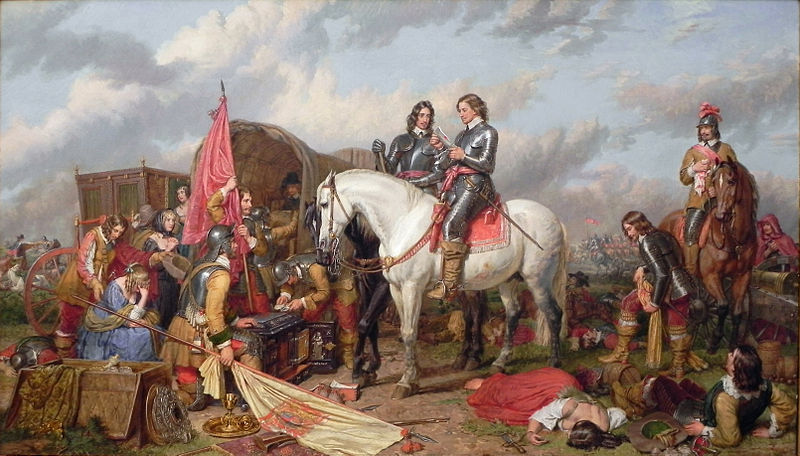 Battle of Naseby, by an unknown artist. The victory of the Parliamentarian New Model Army, under Sir Thomas Fairfax and Oliver Cromwell, over the Royalist army, commanded by Prince Rupert, at the Battle of Naseby (June 14, 1645) marked the decisive turning point in the English Civil War. Credit: Encyclopaedia Britannica Online[/caption]

After exploring hundreds of original manuscripts and printed works, a handful of fascinating cases were revealed. Wives, unmarried partners, would-be female soldiers and even prostitutes were present. Some women were motivated by a desire to fight; others wanted to remain close to their husbands. For example, the mistress of captured royalist Lord Henry Percy is documented to have been dressed in men’s clothing to hide her identity. To ridicule her, Oliver Cromwell got the woman to sing, so as to confirm his suspicions of the would-be man as a ‘damsel’.

One anonymous letter from 1642 describes a woman named Nan Ball, who was “taken in mans cloathes, waiting upon her beloved Lieutenant” while he served in the king’s army near York. It was later published in a pro-royalist news pamphlet, sparking an investigation. The Lieutenant was sacked, and there were suggestions that Nan Ball ought to be shamed by either public whipping or pillory. However, after an intriguing letter from the king’s son, which saw him beg for her reprieve, she was simply expelled from the camp. Exactly why her punishment was lifted is unclear; but it is possible that the initial threats were simply a warning.

The following year, a draft proclamation set out the required standards of behaviour for the army of King Charles I. In the margin, the king hand-wrote: “lett no woman presume to counterfeit her sex by wearing mans apparall under payne of the severest punishment”. Professor Stoyle was fascinated by this statement: “These words suggest the king believed female cross-dressing was quite widespread in his army and show a willingness on his part to take a much firmer line on the practice – particularly in relation to prostitutes. Curiously though, when the proclamation was finally published it contained no reference to cross-dressing.” [caption id="attachment_8701" align="aligncenter" width="500"]

Cromwell in the Battle of Naseby in 1645 by Charles Landseer. Credit: Wikimedia Commons[/caption]

Dressed to kill: female bravery during the English Civil War

A pamphlet published in 1645 details the account of a young soldier who spent a year in the parliamentary garrison of Gloucester. Eventually, she was discovered to be a woman after visiting a tailor to order a petticoat and waistcoat ‘for my sister’. The suspicious tailor raised the alert with the military authorities. In their investigation, they found that the solider had bravely disguised herself in order to first escape the royalists, and then fight against them. These pioneering women represent just one example of how female bravery was forced into disguise as they navigated a society rocked by war. Stoyle finishes: “Above all, though, the subject of female cross‐dressing during the Civil War is surely worthy of detailed study in its own right because it helps to illuminate one small corner of a much larger story: that of how ‘the crisis in English affairs’ during the 1640s made space for some bold women fleetingly to test the boundaries of patriarchy.” Read the full paper here.]]>
Tags: EnglandEnglish Civil Wargendertransgender
Share 0
Tweet
Share
Share
Share