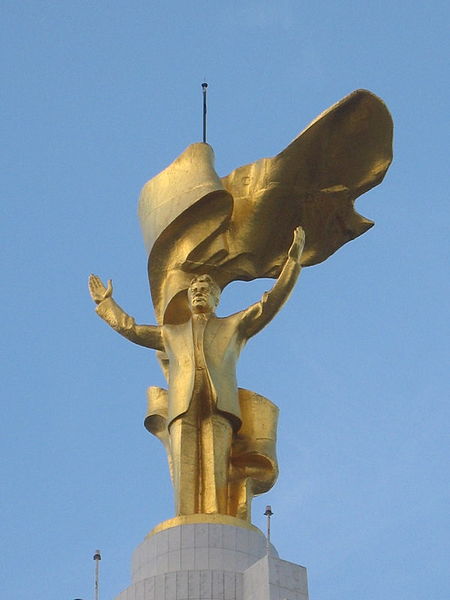 “The strangest leader west of North Korea”: the personality cult of Turkmenbashi

Turkmenbashi rises to power Turkmenistan had operated under Russian control for more than a quarter of a century when it became part of the Soviet Union in 1924; so when Communism fell, the country found itself independent for the first time in 100 years. When it came to appointing a new leader, Saparmurat Niyazov was the obvious choice. Having operated as the Communist Party’s puppet governor since 1985, he was already considered by many to be the country’s ruler. Still, an election took place. On 21st June 1992, the Turkmenistani presidential election saw Niyazov chosen as the country’s first elected president. He was the sole candidate.

One of his first acts was to declare himself Türkmenbaşy, or Turkmenbashi. Shortly afterwards, a plebiscite extended his term to 2002. Allegedly, it was to enable him to oversee a decade-long development plan. The proposal achieved a 99.9% approval rate in the vote. However, before the term was complete, Parliament declared him ‘President for Life’. It was no coincidence that parliamentary elections had been held just a few weeks earlier, in which the president had chosen all the candidates.

Extreme mismanagement of the economy

The gas-rich state allowed Turkmenbashi to indulge himself at the expense of a downtrodden population. His National Democratic Party managed the economy disastrously; meaning that 35% of the population lived below the poverty line. The average income, in fact, was less than £30 a month. Housing and fuel were cheap; but healthcare and education were sparse. This didn’t stop him from commissioning Central Asia’s largest mosque, the Spirit of Turkmenbashi, at a reported cost of £60m. On top of the hardships of widespread poverty, the ubiquitous image of the leader became inescapable. And yet, criticising the money lavished on this and other presidential projects – such as eccentric horse race tracks – would be committing the offence of ‘parricide’. In the national criminal code, this was defined as ‘questioning the policy of the president’.

Many of Turkmenistan’s new laws reflected an uncontrollable ego. When he gave up smoking in 1997, so too did his populace (in public places, at least). Doctors took an oath not to Hippocrates, but to Turkmenbashi. The month of January was renamed Turkmenbashi; and a 250 ft gold statue of Turkmenbashi constantly rotated to face the sun. Streets, cities schools, and even the airport were all renamed Turkmenbashi, making the country increasingly difficult to navigate. When a meteorite landed in Turkmenistan in 1998, its given name surprised no one. [caption id="attachment_8752" align="aligncenter" width="450"]

And yet, for all of his self-aggrandising moves, there are few that compete with his book. Like Chairman Mao and Colonel Gaddafi before him, Turkmenbashi penned a philosophical treatise known as Ruhnama, which is Persian for ‘Book of the Soul’. To celebrate finishing it in September 2001, he renamed the month ‘Ruhnama’. A combination of poetry, moral guidelines and revisionist history, it became compulsory reading in all schools. Indeed, an entire day of the schoolchild’s week was spent on Ruhnama. Memorisation was required to graduate, get a state job or receive a driver’s license. Its effect was not limited to the mortal lives of the people. The book lay next to the Quran in mosques, and it was to be kissed by all worshippers on entering the building. Shortly before his death, Turkmenbashi even suggested that reading the Ruhnama was a requirement for entry into heaven. Without much competition (all Soviet-era books were banned), Turkmenbashi awarded himself the Magtymguly International Prize, an accolade honouring the best pro-Turkmen poetry.

The edict of Ruhnama was so strictly enforced that when former chief mullah Nasurallah Ibadullah resisted, he was punished with a 23-year prison sentence. But of course, extreme punishments became characteristic of Turkmenbashi’s rule. Some were welcomed by certain pockets of society: he would execute Turkmen gangsters and display their dead bodies on national television. Other punishments were more political. In 2002, the country’s former foreign minister, Boris Shikmuradov, wrote an open letter accusing Turkmenbashi of staging an attack on his car so that he could enforce harsh laws. He wrote: “I intend to hand myself in to the National Security Ministry in the hope my arrest will stop the massive arrests and torture of innocent people… I write this while I am free. I can only assume what will happen to me in the near future… We have several times witnessed how people were physically and psychologically tortured.” Shikmuradov was arrested in December that year, confessed to his crimes on national television and was jailed for life. After that, the number of political prisoners in the country rocketed to an estimated 20,000. Many were forced to watch as their relatives were beaten. [caption id="attachment_8753" align="aligncenter" width="334"]

The strangest leader west of Pyongyang?

On 21 December 2006, Turkmenbashi died of a heart attack. Since then, his successor has been busy dismantling a personality cult that permeated every aspect of Turkmenistan’s society. As political author Daniel Kalder writes, “Soon Niyazov will be reduced to a footnote of history, a joke to all except the unfortunate five million Turkmens obliged to live under his rule.”]]>
Tags: RussiaSovietSoviet Unionturkmenbashiturkmenistan
Share 0
Tweet
Share
Share
Share