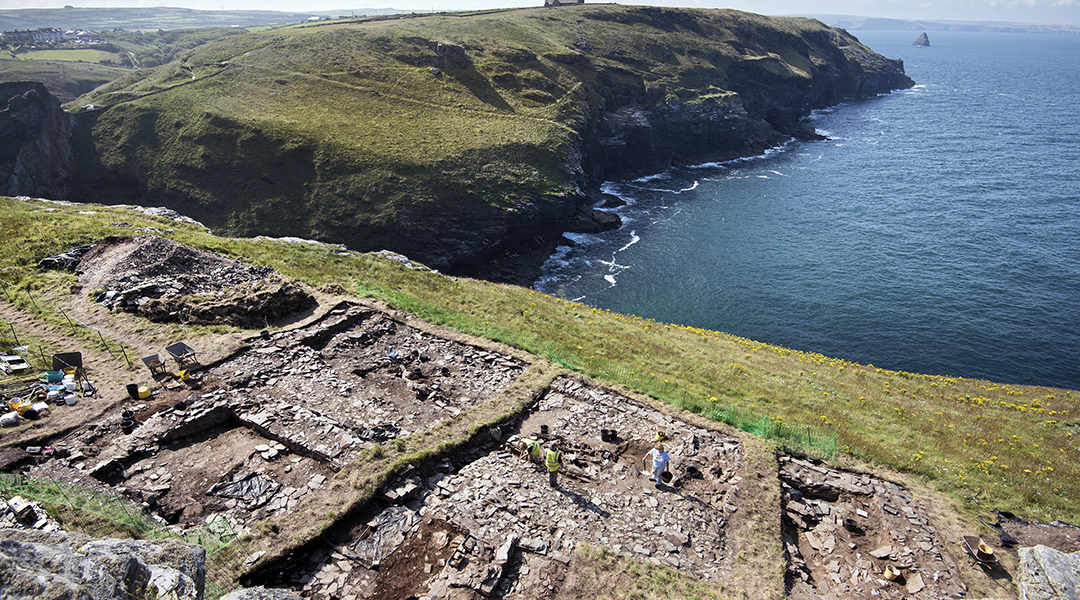 A court on the coast? The craggy Cornish coastline might not seem like an obvious choice for the location of a royal court. Nonetheless, English Heritage, which manages Tintagel Castle, says the find “lends further weight to the theory that Tintagel was a royal site with a literate Christian culture, and a network of connections stretching from Atlantic Europe to the eastern Mediterranean.” [caption id="attachment_8761" align="aligncenter" width="500"]

Ancient writing inscribed in slate was discovered during an ambitious excavation at Tintagel Castle last summer. English Heritage has revealed the find ahead of it going on display at the Cornish castle. Credit: English Heritage / Emily Whitfield-Wicks[/caption]

Specialist digital imaging was created by Dr Tom Goskar to show the detail of the inscription. English Heritage has worked with a panel of experts to decipher the cryptic message from the past. Credit: English Heritage /Tom Goskar[/caption] It is believed that the scribe was practicing their handwriting while gazing out to sea. The decorative script can be likened to the illuminated Gospel manuscripts of the age, meaning that whoever wrote this would have been familiar with those texts. English Heritage Curator Win Scutt comments: “It’s incredible to think that 1300 years ago, on this dramatic Cornish cliff-top, someone was practising their writing, using Latin phrases and Christian symbols. We can’t know for sure who made these marks or why, but what we can say is that 7th Century Tintagel had professional scribes who were familiar with the techniques of writing manuscripts –– and that in itself is very exciting.” Writing from the early Middle Ages is rarely legible, but these words and symbols are clear enough to indicate that the person was familiar with both informal and formal scripts. Scutt continues: “Our ongoing research has already revealed the extent of Tintagel’s buildings and the richness of the lifestyle enjoyed here. This latest find goes one step further to show that we have a literate, Christian community, with strong connections from Atlantic Europe to the Mediterranean. Writing was a privileged pursuit, undertaken by specialist scribes attached to the Church or wealthy households. The discovery of this stone supports the idea that Tintagel was an important, thriving trade port, and a high-status settlement which could have been the seat of Cornish kings.” University of London’s Michelle Brown will decipher the inscription with the assistance of textual expert Oliver Padel. She considers the style of the writing to be as significant as the chosen words: “The survival of writing from this period is rare and this is a very important find, especially in terms of the continuity of a literate Christian tradition in post-Roman Cornwall. The lettering style and language used, as well as Christian symbols exhibiting Mediterranean influence and contacts, all reveal precious clues to the culture of those who lived at Tintagel in the 7th century.”

The windowsill is not the first example of medieval writing to be unearthed at Tintagel Castle. In 1998, research revealed a stone inscribed with several words, including the Celtic name ‘Artognou’. Like the Artognou stone before it, this new windowsill is scheduled to undergo deep analysis. High resolution scanning is planned, which is likely to reveal just how the marks were engraved.

The legend of King Arthur was first brought to attention in the 12th Century by Geoffrey of Monmouth’s The History of the Kings of Britain. The debate over King Arthur’s existence continues; though Scutt considers the legend itself to have profound importance. “We can’t ignore legends,” he says. “This castle was built by Richard, Earl of Cornwall purely because of the Arthurian legend. There was no other reason for the castle to be here. These excavations will enable us to learn more about the older site, and we hope in turn they will encourage people to visit it.” For now, the stone will go on display at Tintagel Castle in Cornwall, UK.]]>
Tags: CornwallKing ArthurMedievalmiddle ages
Share 0
Tweet
Share
Share
Share