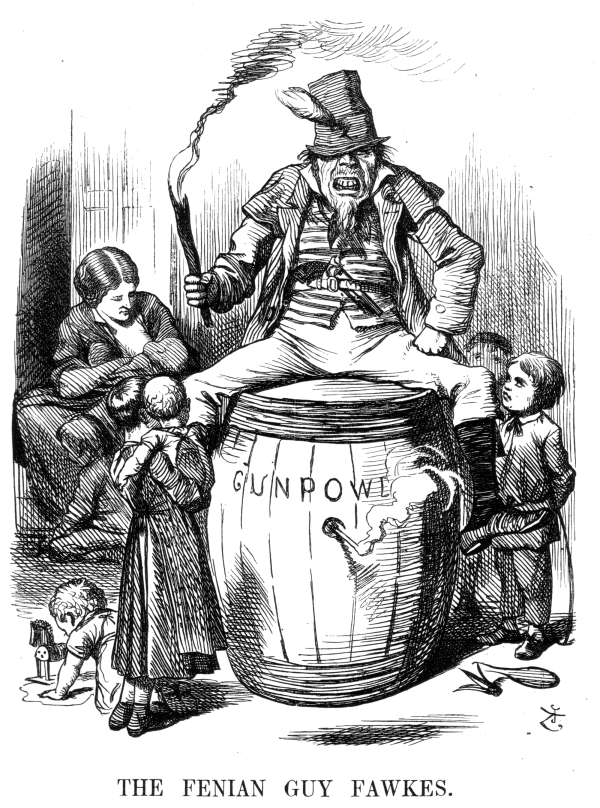 The Irish Fright of 1688: racism, rumours and the reign of fake news

here). Often, outbreaks occur in small, tight-knit groups, due to the intensity of collective thinking. But if common thought is scaled up, hysteria can still occur. The Irish Fright of 1688 is a solemn reminder that when a prejudiced ideal is held by an entire country, fear can hypnotise the human mind into insanity. All it needs is a catalyst: political instability. [caption id="attachment_8768" align="aligncenter" width="600"]

The 17th Century Englishman’s understanding of the Irish

The trope of the ‘wild Irishman’ had been a firm narrative of the British Empire for centuries. Negative stereotypes appear as far back as 1190, with the Norman chronicler Giraldus Cambrensis justifying the Norman invasion of Ireland. He penned Topographia Hibernica, or Topography of Ireland, which played a lasting role in shaping English colonial attitudes towards the Irish. More than just poor and uncultured, the Irish were painted as unholy. In The Anglo-Irish Experience, 1680-1730: Religion, Identity and Patriotism, historian DW Hayton says: “the native Irish were called ‘a brutal race that Israel’s God ne’er knew’”. Conditioned by a racist misconception of the Irishman, the English people had a well-established fear. With political instability nibbling at their heels, they were primed for acts of mob mentality.

When King James II took the throne after the death of the ‘Merry Monarch’ Charles II, his policies of religious tolerance were met with opposition from the political powers. Troubled by the new King’s Catholicism and his close ties with France, they were increasingly outspoken about the king’s unsuitability for the throne. Prior to the birth of James II’s son on 10th June 1688, the heir presumptive had been his 26-year-old daughter Mary, a Protestant married to William of Orange.  This change in the line of succession meant that the establishment of a Roman Catholic dynasty seemed ever more likely. In private, Tories and Whigs worked together to bring William of Orange to England to perhaps quell any danger of rising Catholic influence.

On his ascension to the throne, James had inherited an army in Ireland. It was made up of 8,238 men; majority Protestant. Over the next three years, the army would welcome some Catholic soldiers and grow to have almost 9,000 men. Due to the looming threat of an expected invasion by William of Orange, the English Army needed support from Irish troops. When 2,820 men were sent to Portsmouth in September 1688, the townspeople were suspicious. Fear began to spread. A few weeks after the Irish soldiers arrived, a newspaper reported that people were making “great complaints of the rude Irish who have caused many families to leave that place, having committed many robberies.” Rather than robberies, the true fear of the local people was that Irish or Catholic forces were in a fine position to launch an anti-Protestant uprising. In fact, just a few years earlier, the House of Lords had announced that there was a “horrid and treasonable Plot and Conspiracy, contrived and carried on by those of the Popish Religion in [Ireland], for massacring the English, and subverting the Protestant Religion, and the ancient established Government of that Kingdom.” As the Glorious Revolution to overthrow James II took hold, the Irish troops were ordered to go north to fight in the Battle of Reading on 9th December 1688. After a sorry defeat, some Irish troops were sent back to Portsmouth; some to Uxbridge, just west of London.

One account from 1746 quotes Bishop Gilbert Burnet: “Country Fellows, arriving about Midnight at Westminster caused a sudden Uproar by Reporting that the Irish, in desperate Rage, were advancing to London, and putting all before them to Fire and Sword.” Other news writers passed similar comment, immediately igniting enough panic for 100,000 men to mobilise. Contemporary accounts tell us that men were discharging firearms and beating drums rapidly. Women were able to contribute more significantly to the din by beating pots and pans. False reports flew about the country. Allegedly, Uxbridge had been ransacked by the Irish. The House of Lords even had an emergency meeting at 3am in Whitehall to dissect the situation. Rather than subsiding due to lack of evidence, the Irish Fright snowballed. The following day, hysterical reports that the Irish were attacking Kent and Norfolk caused people to mobilise. People living in Kingston-upon-Thames started to cut down trees to barricade themselves against the ‘wild Irishman’. Madness swept northwards. By 15th December, Yorkshire succumbed to the Fright; believing that both the Lancastrians and the Irish were coming to burn their towns to the ground. Three days later, the Fright reached remote parts of England and Wales. On 18th December, a local mob shot and killed a supposed Irishman. As it turned out, he was an exciseman; someone they might have been happy to see the back of anyway. Significantly, the reports feeding from one town to the next talked about “8 or 9,000 Bloody Irish,” despite only 2,820 men having been stationed in Portsmouth originally. Hayton comments: “This panic was the climax to a decade of Whig propaganda, seeking to terrify the English public with the traditional nightmare of bloodthirsty Irish papists. That the programme worked so well proved the persistence in England of the popular reputation of the Irishman as a cruel savage, though it did require a political crisis to realise its full potential.”

The fallout of the Fright

Contemporary accounts tell us that at least 19 counties were swept up into the Irish Fright. All displayed a similar narrative: an onslaught of bloodthirsty Irishmen were said to have massacred the inhabitants of towns only around a day’s journey away. The panic burned brightly for a day or two before subsiding. Although the exciseman was the only casualty, innocent Catholics were targeted. A diarist noted: “[Protestant mobs] made most miserable of all the papists’ [Catholics’] houses they came near; for, under pretence of seeking for arms, they did many thousands of pounds worth of hurt, cutting down rich hangings, breaking through walls, pulling in pieces of excellent ceilings … then they secured all the papists they could get, intending to carry them all away to prison.” [caption id="attachment_8769" align="aligncenter" width="600"]

Anti-Irish propaganda from ”Punch” magazine, published in May 1882. Credit: Wikimedia Commons[/caption] For all of its insanity, the Irish Fright was not a standalone, freak occurrence. Historians agree that it bore a striking resemblance to the French Great Fear of 1789, which followed the fall of the Bastille. In both uprisings, false rumours of massacres caused men and women to take up arms. Concerns about a collapsing regime, coupled with the cold realisation that no central authority could protect the people, resulted in a volatile civilian situation. With its echoes throughout history pointing towards a continuing relevance, the Irish Fright is a startling reminder of the power of a racist narrative in times of political instability.]]>
Tags: British EmpirecolonialismEnglandIrelandirish frightmass hysteria
Share 0
Tweet
Share
Share
Share