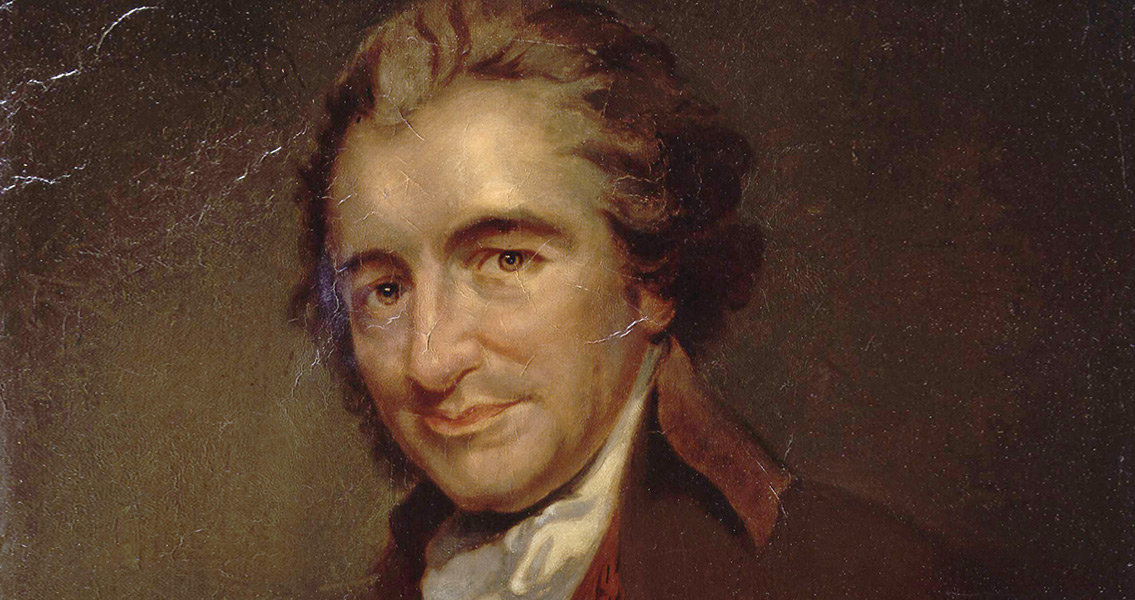 Common Sense was first published as a pamphlet in 1776. The hugely influential seventy-seven page work was one of the first to argue in clear, direct fashion that the future of the American colonies should be one independent from Great Britain. Along with general discussions on the nature of politics and society, Paine’s pamphlet also engages with what he perceived as fundamental flaws in the British political system and the defining injustice of monarchy. All of these factors are combined to form a justification for US independence. Paine was born in Thetford, England, in 1737. He finished his formal education at the age of thirteen and started to work for his father. Throughout his teens and twenties he took in a variety of jobs, ranging from corset maker to school teacher to tax collector. At the same time he used his spare time to pursue the education he hadn’t completed in his youth. He lost the tax collecting job in 1772, after he’d published an article arguing that an increase in tax collectors pay would lead to a reduction in corruption. In 1774, shortly before the American Revolution started, Paine left England for North America. He quickly became involved in American political life, editing the Pennsylvania Magazine and writing a host of articles. At this point relations between the North American colonists and the British were in a precarious state. Several protests against excessive British taxation of the colonies, most notably the Boston Tea Party of December 1773, had already taken place. As more British troops were sent to the colonies, a growing campaign formed among the colonists to break Britain’s interfering presence. Crucially, at this point most colonists viewed themselves as still holding some connection to Britain, and as such campaigned to break the aggressive British taxation rather than win complete independence. Commons Sense played a key role in changing the focus of the campaigns by making a clear argument for independence. At a time when the stirrings of the Revolutionary War had already started with a battle at Lexington and Concord in 1775, Commons Sense convinced many colonists that the only solution was to completely cut all connections to the British government. Pivotal was Paine’s highlighting of the fact that many of the colonists were not just from England, but had actually fled to North America from across Europe in search of liberty. “This new world hath been the asylum for the persecuted lovers of civil and religious liberty from every part of Europe. Hither they have fled, not from the tender embraces of the mother, but from the cruelty of the monster.” By framing the history of migration to the colonies as one from persecution to liberty, Common Sense provided a political justification to the campaign for freedom, and established a clear distinction between the colonists looking for liberty and the conservative politics of the Old World. At the same time, painting Britain as a monster ruled by a tyrannical monarchy and dominated by inequality made explicit the sense of a fundamental divide between the values of the colonists and their rulers across the Atlantic. The pamphlet also argues that when America won its freedom from Britain, its people would stop being rebels and instead become respected internationally. This in turn would allow the new country to make important alliances to further strengthen its position and gain support in its campaign for liberty and freedom. Paine’s Common Sense is a crucial work in understanding American history. Undoubtedly the movement towards the Revolutionary War was already well underway before he had even reached North America. However, the seventy-seven page pamphlet is vital for helping to develop an understanding of the ideological arguments used in the build up to the Declaration of Independence.