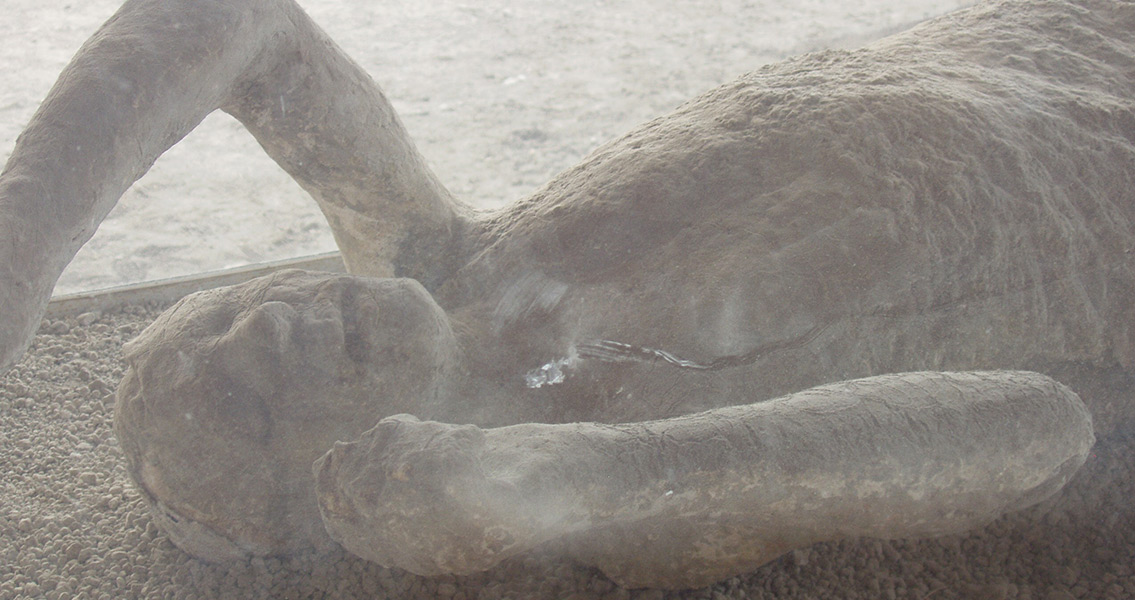 Natural History and one of Rome’s most learned men when it came to nature, continued relaxing in his home close to Pompeii despite noticing a massive plume of smoke billowing out of the mountain. Pliny the Younger had noticed the earth tremors in the preceding weeks, but casually noted in his account that they “…were not particularly alarming because they are frequent in Campania.” Lasting for twenty four hours, the few who realised the danger of the eruption had the chance to escape the danger zone. For several hours a rain of ash and pumice fell on the area surrounding the mountain, causing many, including the elder Pliny, to take shelter in their residences. Just after midnight on the 25th a pyroclastic flow from the volcano engulfed Herculaneum, annihilating the town and causing any survivors to flee towards Pompeii. Several hours later, on the morning of the 25th, Pompeii itself was also destroyed as a cloud of volcanic gas and debris rolled down the slope of the mountain and smothered the city. Buildings were smashed by pyroclastic waves, while people fleeing the eruption or sheltering under roofs were killed instantly. Exact casualty figures for the eruption are impossible to tell, as the corpses that archaeologists study today represent only a small sample of the total. Towns, villages and countryside from the south of Vesuvius all the way to the Sorrentine Peninsular, some 20 km away, were devastated by the eruption. The Romans wouldn’t rebuild or repopulate the area destroyed by the eruption. The site of Pompeii was left to be sacked by looters, who tunneled holes into the city’s buildings to steal any valuables that had survived. The eruption affected the Bay of Naples as a whole, although Naples itself and other settlements on the northern bank of the bay were either hardly impacted upon, or recovered quickly, it led to a decline for Naples as a vacation location for the wealthiest of Roman society. Image courtesy of Wikimedia Commons user: Glmike523 ]]>