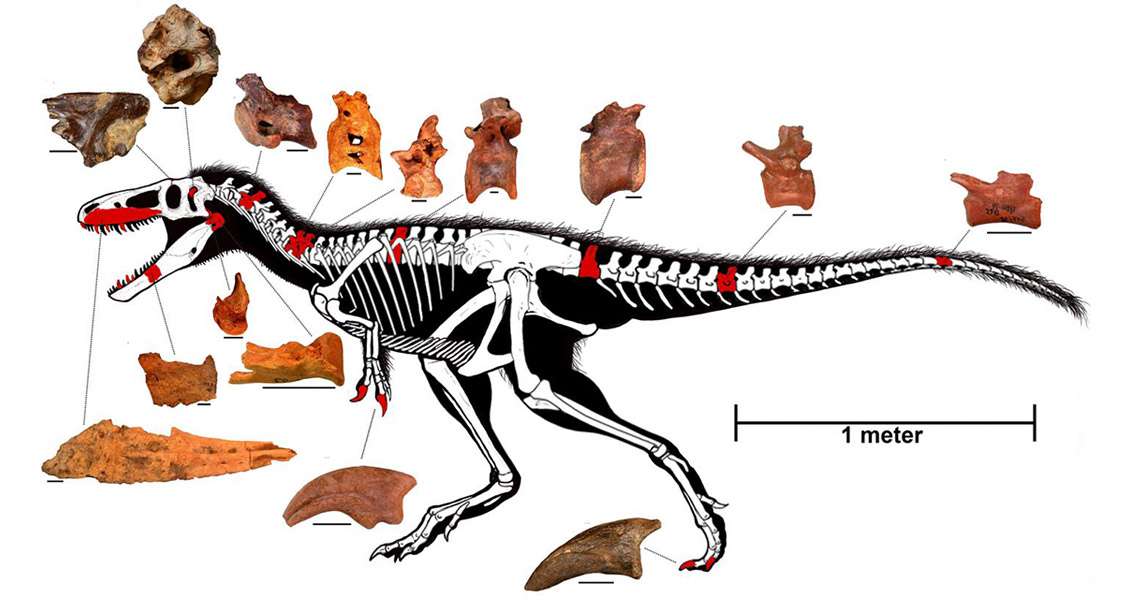 Origins of the T.rex: Brains Came Before Brawn

Timurlengia euotica, were discovered over the course of nine years during international expeditions to the Kyzylkum Desert of Uzbekistan. The creature lived around 90 millions years ago, and slots into a 20 million year gap in the fossil record of tyrannosaurs. Although a fellow tyrannosaur, T.eutoica is not the ancestor of T-Rex. About the size of a horse, Timurleniga could have weighed up to six hundred pounds. Its long legs mean it was likely a fast runner. “Timurlengia was a nimble pursuit hunter with slender, blade-like teeth suitable for slicing through meat,” explained Hans Sues, chair of the Department of Paleobiology at the Smithsonian’s National Museum of Natural History, in a press release. “It probably preyed on the various large plant-eaters, especially early duck-billed dinosaurs, which shared its world. Clues from the life of Timurlengia allow us to fill in gaps and better understand the life and evolution of other related dinosaurs, like T. rex.” Perhaps surprisingly, the study, published in the Proceedings of the National Academy of Sciences, suggests that brains came before brawn in the evolution of Tyrannosaurs. Prior to the development of their giant size and strength, Tyrannosaurs developed keen senses and cognitive abilities. These heightened abilities allowed them to reach the top of the food chain after other large meat eating dinosaurs had gone extinct, 80 – 90 million years ago. Although typically associated with North America, T.rex’s and other Cretaceous dinosaurs mostly had their routes in Central Asia. “The discoveries from the Kyzylkum Desert of Uzbekistan are now helping us to trace the early history of these animals, many of which later flourished in our own backyard in North America.” Sues said in the press release. The new species was discovered while Sues and a team of paleontologists led by Steve Brusatte at the University of Edinburgh were sorting through the bones brought back from the Kyzylkum Desert. CT scans of the brain case allowed the team to reconstruct Timurlengia’s brain and gather insights into the development of its abilities. “The ancestors of T. rex would have looked a whole lot like Timurlengia, a horse-sized hunter with a big brain and keen hearing that would put us to shame,” explained Brusatte. Tyrannosaurs originated in the Jurassic Period around 170 million years ago, but they were barely the size of a human. 100 million years later, in the Cretaceous Period, they had evolved into animals like T-rex, which weighed up to 7 tons. The fact Timurlengia was so small, despite living some 80 million years after tyrannosaurs had first appeared, indicates the group’s terrifying size only occurred relatively late in their evolutionary history. For more information: www.pnas.org Image courtesy of © Proceedings of the National Academy of Sciences]]>