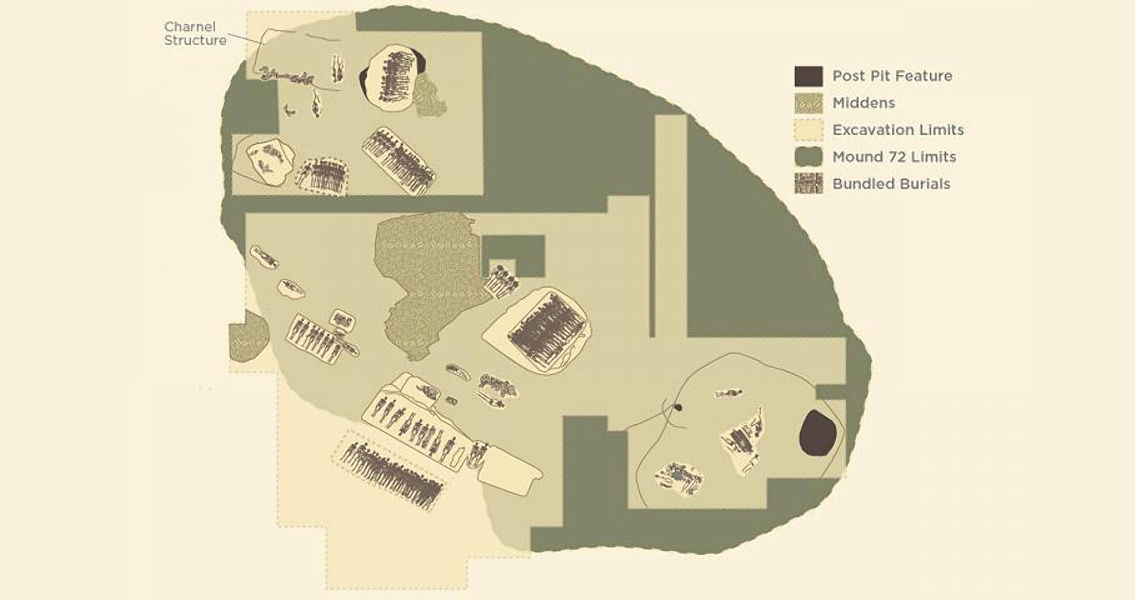 American Antiquity, the focus of the new study is Mound 72: a massive burial site discovered in 1967 by archaeologist Melvin Fowler. The impressive Mound 72 held five mass graves, the smallest containing only twenty bodies, the biggest over fifty. Dozens of other bodies were buried individually or in groups there, some directly over the mass graves. By the end of his study, Fowler had identified 270 bodies in the mound. Some of them had been placed in cedar litters, leading Fowler and his team to conclude they had been people of high status during life. Later studies determined that all of the bodies had been interred between 1000 CE and 1200 CE. Cahokia was at its peak during this period, with historians claiming the city’s population was as high as 20,000 during the eleventh century. “Mound 72 burials are some of the most significant burials ever excavated in North America from this time period,” said ISAS (Illinois State Archaeological Survey) director Thomas Emerson, who conducted the most recent study with physical anthropologist Kristin Hedman and skeletal analysts Eve Hargrave of ISAS, Dawn Cobb of the Illinois State Museum Society, and Andrew Thompson of the University of Cincinnati College of Medicine. “Fowler’s and others’ interpretation of these mounds became the model that everybody across the east was looking at in terms of understanding status and gender roles and symbolism among Native American groups in this time.” Fowler’s remarkable discovery, and subsequent interpretation of Mound 72, were hugely influential. However, Emerson and colleagues have found that some of the original conclusions were based on inaccurate or incomplete information. According to them, a key misunderstanding relates to the beaded burial, where two bodies were buried on top of each other on a partial bed of beads. Several other bodies, interred at the same time, were buried around the centrally placed pair. For Fowler, this unique burial was interpreted as two high status males surrounded by their servants. The pattern of the beads around the bodies was thought to resemble a bird’s head. In many Native American traditions birds are associated with warriors and supernatural beings, something which led Fowler to conclude the beaded burial represented mythical warrior chiefs. This interpretation came to be taken as evidence that Cahokia was a male dominated hierarchy, but the new analyses by Emerson and his team have thrown this conclusion into doubt. Firstly, they found that there were in fact 12 bodies involved in the beaded burial, not just six as previously reported. Most dramatically, the team concluded that the two bodies at the centre of the burial were a male and a female, not two males. Further study by the team revealed other inconsistencies. There were other male and female pairs in or near the burial. There was also evidence of the bones of disarticulated bodies being gathered up and placed for burial next to these important couples. The team even found the remains of a child. “We had been checking to make sure that the individuals we were looking at matched how they had been described,” said Hedman. “And in re-examining the beaded burial, we discovered that the central burial included females. This was unexpected.” “The fact that these high-status burials included women changes the meaning of the beaded burial feature,” Emerson explained. “Now, we realize, we don’t have a system in which males are these dominant figures and females are playing bit parts. And so, what we have at Cahokia is very much a nobility. It’s not a male nobility. It’s males and females, and their relationships are very important.” It’s a conclusion which fundamentally changes the image of Cahokia society, showing it to be class based rather than split along gender lines. For Emerson, this wasn’t a surprise based on his experience at other Cahokia sites. “For me, having dug temples at Cahokia and analyzed a lot of that material, the symbolism is all about life renewal, fertility, agriculture,” he said. “Most of the stone figurines found there are female. The symbols showing up on the pots have to do with water and the underworld. And so now Mound 72 fits into a more consistent story with what we know about the rest of the symbolism and religion at Cahokia.” The scientist believes the misinterpretation of Mound 72 is an example of archaeologists projecting the practices of other North American indigenous cultures onto the Cahokia, and subsequently missing much of what made the civilisation unique. “When the Spanish and the French came into the southeast as early as the 1500s, they identified these kinds of societies in which both males and females have rank,” he said. “Really, the division here is not gender; it’s class.” Emerson said “People who saw the warrior symbolism in the beaded burial were actually looking at societies hundreds of years later in the southeast, where warrior symbolism dominated, and projecting it back to Cahokia and saying: ‘Well, that’s what this must be… And we’re saying: ‘No, it’s not.'” Graphic by Julie McMahon]]>