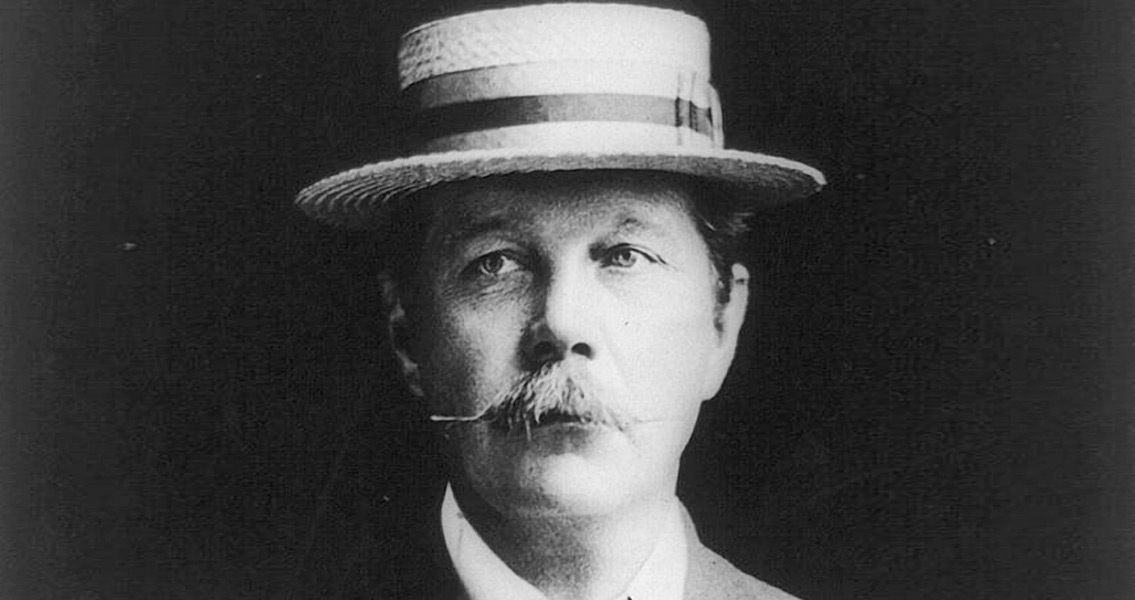 Conan Doyle Beyond Sherlock, From Fairies to Atrocities

Harry Houdini over the validity of spiritualism; became embroiled in solving a real life murder mystery, and was until recently believed to have been involved in one of the great archaeological hoaxes of the twentieth century. Conan Doyle was born in Edinburgh, Scotland on 22nd May, 1859. Doyle’s family were affluent, strict Irish Catholics. His father was a respected artist whose achievements had ultimately been thwarted time and again by alcoholism. His mother was a well educated woman with a passion for reading. She would prove hugely influential in Conan Doyle’s life, as he wrote in his biography: “In my early childhood, as far as I can remember anything at all, the vivid stories she would tell me stand out so clearly that they obscure the real facts of my life.” In 1876 Doyle embarked on a medical degree at the University of Edinburgh. It was here that the youngster wrote and had published his first short stories, in many ways reflecting a balance between practical scientific study and fantasy that would come to define his work. The Sherlock Holmes character first appeared in 1887’s A Study in Scarlet, published in Beeton’s Christmas Annual. Holmes was partly based on Dr. Joseph Bell, one of Doyle’s lecturers who impressed him with his intense attention to detail, a trait clearly reflected in the character. Beyond Holmes however, Doyle’s medical background is also reflected in Round the Red Lamp and the Stark-Munro Letters; the latter a novel depicting the live of a young medical graduate in nineteenth century England, the former a collection of short stories on the trials and traumas of the medical profession. Alongside fiction, Doyle engaged with highly controversial issues of the day. Inspired by “a burning indignation”, he wrote the The Crime of the Congo in just eight days in 1909. Dealing with the atrocities taking place in the Congo on behalf of Belgian King Leopold II, the powerful book included graphic portrayals of violence and is littered with horrific photos of mutilated victims. Not satisfied with the publication of his written description of the horrors in the Congo, Doyle used his fame to lobby world leaders such as Kaiser Wilhelm and Theodore Roosevelt. Doyle’s work straddles the line between the factual and the fantastical. His groundbreaking science fiction novel The Lost World tells the story of a group of explorers discovering a South American plateau where prehistoric animals survive. Although an adventure story, it is littered with references to real prehistoric creatures such as dinosaurs and hominids. It’s a book which engages with the idea of evolution at a time it was still considered cutting edge, and shows Doyle’s own interest in the sciences. Towards the end of his life Doyle became fascinated with the mystical and the occult, unveiling another, perhaps totally unexpected facet to this complicated individual. He fell out with Houdini following the illusionist’s campaign to debunk Spiritualism, Doyle having spent much of the 1920s writing books championing Spiritualist beliefs. In 1922, Doyle wrote The Coming of the Fairies, a book which promoted the Cottingley Fairies photographs. Opinion was divided at the time as to whether the images of two girls playing with fairies were a hoax (the girls finally admitted in the 1980s that the images had indeed been faked), and for many, Doyle’s passionate championing of the fairies did long term damage to his literary reputation. Sir Arthur Conan Doyle will likely always be best remembered for his most recognised character, the deerstalker and pipe bearing Sherlock Holmes. By looking at his other works however, an image of a deeply complicated, fascinating individual emerges. ]]>