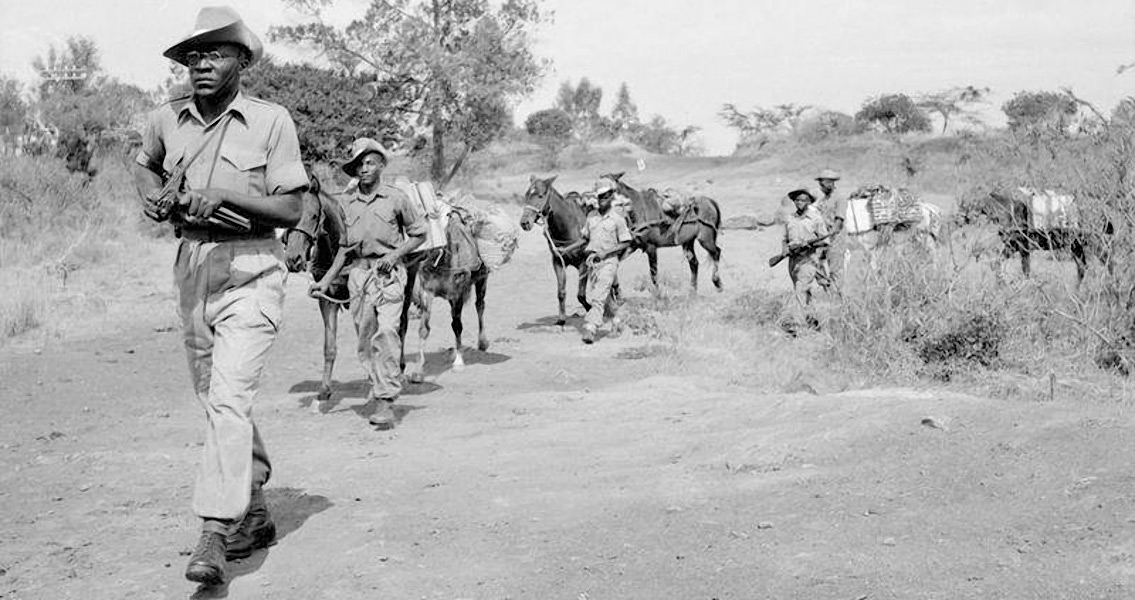 concentration camps created in the Boer War. 1.5 million Kikuyu, Embu and Meru civilians were feared to hold allegiances to the Mau Mau. As Dr Huw Bennet wrote in a 2015 Guardian article: “Africans living in the so-called Kenya Emergency areas were deemed guilty until proven innocent.” The majority of those people living in the Emergency Area were either sent to detention camps or forcefully relocated to new villages where they could be kept under heavy surveillance. Official records described these detention camps as rehabilitation centres, places where occupants received classes in home-crafts and civics. Any acts of violence or brutality reported were deemed isolated incidents, exceptional cases far from the norm. It is a description which matches the broader narratives given by defenders of the British Empire, a description that suggests a benevolent, civilising imperialist force. As the years went on however, sickening cracks started to appear in this account of British involvement in the Mau Mau uprising. Accusations of torture, beatings and sexual assault in the detention camps started to arise. Recent work by historians such as Bennet, David Anderson and Caroline Elkins has started to unravel the scale of the detention camp system. The figure for the number of detainees has been brought into question. Official accounts state 80,000 were held in the camps, while Elkins’ work suggests that number was in fact somewhere between 160,000 and 320,000. Meanwhile, the work of journalists and investigators at the time who exposed human rights abuses has also been revisited, helping paint a more detailed image of what truly happened. A pivotal question is to what extent the abuses at the camps in Kenya were the result of British government policy, as opposed to the excesses of individuals. It’s a controversy which garnered particular attention in 2014, when a group of elderly Kenyans launched a £200 million damages claim against the UK Government. In 2013, then UK foreign minister William Hague had admitted “The British government recognises that Kenyans were subject to torture and other forms of ill-treatment at the hands of the colonial administration”. Still, the true extent of the atrocities in the Mau Mau uprising and the level of complicity of the British government remain shrouded in ambiguity, in large part due to severe gaps in the records available. The eight years of the Mau Mau uprising saw 1,800 African civilians killed, an unknown number of Mau Mau rebels killed, 32 white settlers killed and 200 British soldiers killed. Beyond that, it stands as an atrocious moment at the close of Britain’s imperial history, the true extent, nature and meaning of which is still being unraveled. ]]>