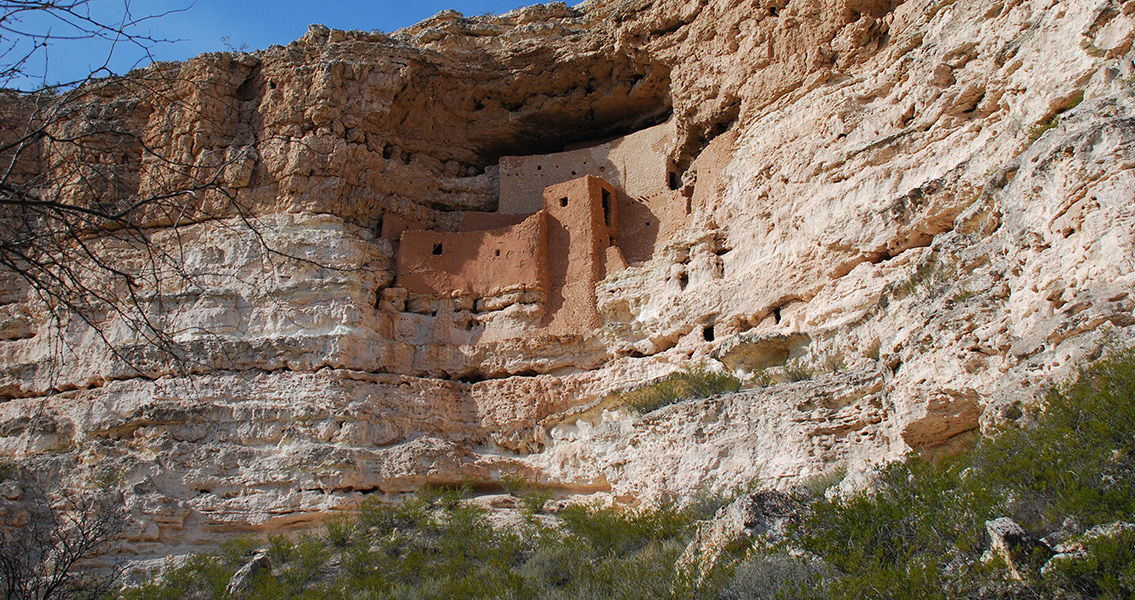 Western Digs: “The conventional thinking left a lot of room for speculation about when and why people might have abandoned the area. The new study doesn’t explain why violence occurred at the site, but it does provide a mechanism for the abandonment. Aside from a small research project conducted in the 1980s, very little archaeological work had been done since the 1930s.” When the site was originally studied approximately 80 years ago, archaeologists discovered a large amount of evidence, including burnt roof beams and charred areas on the wall plaster. One of the structures, the one that became known as Montezuma Castle, was built inside a natural alcove on the face of the limestone cliff, about 90 feet (27 meters) above the canyon floor. The other, erected on the ground next to the canyon’s north wall, was named Castle A. The charred remains of both buildings led many to the conclusion that the buildings burned after they had been abandoned. Later, however, that changed, and some experts came to think the sites had been burned intentionally by the Sinagua as part of some unknown ritual performed as they were leaving. This new research was undertaken to see if new archeological methods and technology could uncover information about why the dwellings were abandoned. Guebard, along with his colleagues, reviewed notes from the original excavations, studied features of the site as well as artifacts which included roof beams, ceramics, and a variety of other architectural elements. Additionally, Guebard solicited several tribal groups whose ancestors were from the Verde Valley, for their input. “Generally speaking, we spend a lot of time and effort working closely with culturally associated Native American tribal governments”, Guebard says in Western Digs. “They review many of our projects and provide important feedback that helps to develop project objectives.” Following these lines of evidence, a completely new picture of the final days at the cliff dwellings started to become clear. For example, new dating of the charred plaster indicates the fire occurred between 1375 and 1395, while the pottery from the dwelling showed signs of having been made in styles from that same time period, suggesting that Castle A was inhabited right up to the time it was burned. Even more persuasive are the four bodies. Discovered in the original excavation in the 1930s, at the time it was believed that the deceased had been buried well before the fire, but a closer look at the earlier research reveals the dead had suffered trauma before their deaths, such as bones with cut marks, burn marks, and skull fractures in three of the four bodies. “We learned that the interior portion of each fracture displayed evidence of singeing on live bone,” Guebard is quoted as saying in the article. “So, the sequence of events seems to be blunt trauma followed closely by burning. It is also interesting to note that all of the remains with reported evidence of trauma and burning were found in a single grave.” The research was corroborated by the oral histories of the Native Americans, which describe Castle A being attacked by rival bands seeking to drive the Sinagua away. “Years before starting the project, I had heard from tribal members that there were stories about violence at the site”, Guebard explains in the article. “So as I started to realize that the archaeological evidence was supporting violence at Castle A, I felt it would be helpful to get their unique perspectives on the project and on my interpretation of the data. What was interesting is how close the oral histories match up with the archaeological evidence, but also how each story provided a unique and different perspective of the event represented by the archaeological evidence.” A Hopi Bearstrap Clan member recounted stories of Sinagua villagers running into Montezuma Castle and then pulling up the ladders, while invaders set it on fire. Members of the Dil zhe’e, also known as the Tonto Apache, recount the story of how their ancestors joined with the Yavapai, and together they evicted the Sinagua by setting fire to the dwellings. ]]>