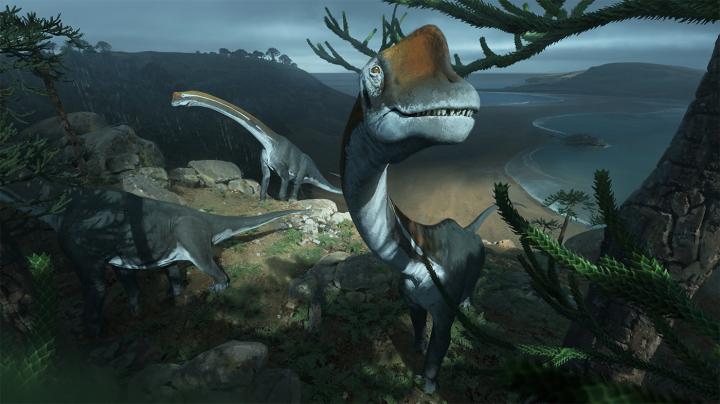 15,000kg Dinosaur Fossil Identified after Being Ignored for Decades

Posted By: Daryl.Worthingtonon: May 02, 2017In: Breaking News
Print Email

Vouivria damparisensis. Dated to around 160 million years old, V. damparisensis is the earliest recorded fossil from the titanosauriform family, a group of dinosaurs which includes the likes of Brachiosaurus. Analysis of the fossil suggests the specimen died at a young age, weighed around 15,000 kilograms and measured over 15 metres in length. Its neck was spectacularly long and was likely held at a 45 degree angle. Much like other titanosauriforms, the creature also boasted a long tail and four legs of equal length. “Vouivria would have been a herbivore, eating all kinds of vegetation, such as ferns and conifers.” said Dr Philip Mannion, the lead author of the study from the Department of Earth Science and Engineering at Imperial College London, in a press release. “This creature lived in the Late Jurassic, around 160 million years ago, at a time when Europe was a series of islands. We don’t know what this creature died from, but millions of years later it is providing important evidence to help us understand in more detail the evolution of brachiosaurid sauropods and a much bigger group of dinosaurs that they belonged to, called titanosauriforms.” Titanosauriforms were the last surviving group of long necked dinosaurs, only coming to an end with the end-Cretaceous mass extinction event which wiped out the majority of life on earth. The gigantic, diverse group of sauropods originated in the Late Jurassic and included some of the largest creatures to have ever walked the planet. V. damparisensis‘ discovery looks set to greatly aid scientists in understanding the evolution and spread of titanosauriforms across the globe, a subject which has until now proven difficult to shed light on due to a limited fossil record for the earliest members of the family. By incorporating the new species into the fossil timeline, the team have shown that by the Early Cretaceous brachiosaurids were likely restricted to what is now Africa and the USA, and probably extinct in Europe. The discovery also throws into question the previously held belief that brachiosaurids spread as far as South America. Scientists have previously suggested that a sauropod dinosaur called Padillasaurus, whose remains have been found in South America, was a brachisosaurid. The discovery of V. damparisensis however, points to that not being the case. The genus name of the new creature is derived from the old French word for viper – vouivre. In the French-Comte region where the fossil was discovered, ‘la vouivre’ is a legendary winged reptile. The species name damparisensis meanwhile, refers to the village of Damparis where the fossil was first found in 1934. Image courtesy of Imperial College London/Chase Stone]]>