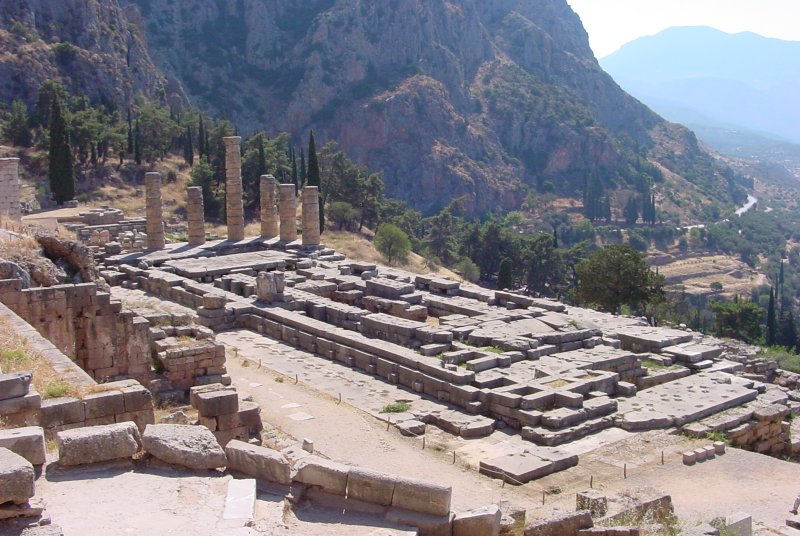 Did Earthquakes Shape Ancient Greek Culture? New research claims that earthquake faults could have played a central role in shaping the culture of Ancient Greece. Professor of Geoscience Communication Iain Stewart MBE, Director of Plymouth University’s Sustainable Earth Institute, has presented a host of documentaries about how the power of earthquakes has shaped landscapes and communities. Now, he claims the Ancient Greeks could have deliberately built sacred or treasured sites on land affected by seismic activity. It has previously been argued that Delphi, once home to a legendary oracle, gained its important role in Classical Greek society as a result of a scared spring and intoxicating gases that emanated from a fault line formed by an earthquake. Stewart argues that Delphi might not be the only such case, suggesting that the cities of Mycenae, Ephesus, Cnidus and Hierapolis could have all been constructed around fault lines. “Earthquake faulting is endemic to the Aegean world, and for more than 30 years, I have been fascinated by the role earthquakes played in shaping its landscape. But I have always thought it more than a coincidence that many important sites are located directly on top of fault lines created by seismic activity,” Professor Stewart said. “The Ancient Greeks placed great value on hot springs unlocked by earthquakes, but perhaps the building of temples and cities close to these sites was more systematic than has previously been thought.” The Aegean region has an abundance of fault lines and ruined ancient settlements, but Stewart claims that many seismic fault traces in the region run through the heart of some ancient settlements’ most sacred structures. In Delphi, for instance, a sanctuary was destroyed by an earthquake in 373BCE. The city’s temple was subsequently rebuilt directly on the same fault line. It’s previously been suggested that legendary tales of individuals descending into the underworld to gain oracular status, could be referring to caves or grottoes formed by seismic activity. Professor Stewart concludes: “I am not saying that every sacred site in ancient Greece was built on a fault line. But while our association with earthquakes nowadays is that they are all negative, we have always known that in the long run they give more than they take away. The ancient Greeks were incredibly intelligent people and I believe they would have recognised this significance and wanted their citizens to benefit from the properties they created.” Frog and Salamander Ancestors had a Full Mouth of Teeth Modern frogs and salamanders are close to toothless, but a new study from the University of Toronto highlights that this was far from the case with some of their ancestors. According to the study, published online in the journal PeerJ, the ancient amphibian ancestors had a full array of teeth, large fangs and thousands of tiny hook-like structures called denticles on the roofs of their mouths that would snare prey. The authors of the paper, Professor Robert Reisz and his colleagues Bryan Gee and Yara Haridy, two graduate students, believe that the tooth bearing plates “were ideally suited for holding on to prey, such as insects or smaller tetrapods, and may have facilitated a method of swallowing prey items via retraction of the eyeballs into the mouth, as some amphibians do today.” In many vertebrates, ranging from fish to early synapsids (ancestors of mammals), denticles are commonly found in dense concentrations on the bones of the hard palate (roof of the mouth). However, in one group of tetrapods, temnospondyls (which are thought to be the ancestors of modern amphibians), these denticles were also found on small, bony plates that filled the large soft part of the palate. Suspended in soft tissue, these toothy palettes are often lost during the process of fossilisation. “Denticles have all of the features of the large teeth that are found on the margin of the mouth,” says Reisz. “In examining tetrapod specimens dating back ~289 million years, we discovered that the denticles display essentially all of the main features that are considered to define teeth, including enamel and dentine, pulp cavity and peridontia.” The team’s study saw them analyse specimens unearthed from the fossil rich Dolese Brothers Limestone quarry near Richards Spur, Oklahoma. Reisz and colleagues claim that the next area of study will be determining why modern amphibians have reduced or no teeth, but their ancient ancestors had mouths full of them. Nazi Relics Discovered in Austrian Parliament A range of Nazi artefacts have been discovered in the Austrian parliament building in Vienna during renovation works, the Jerusalem Post reports. Two busts of Hitler, four Nazi era paintings and a relief were discovered in a box hidden in the building’s basement, reports claim. Following the Anschluss, when Nazi Germany annexed Austria in 1938, the parliament building was turned into a “Gauhaus”, a local Nazi party headquarters. It continued to serve as the Nazi base in Vienna until the end of the Second World War. According to the Jerusalem Post, the Nazi artefacts have now been handed to University of Vienna historians Bertrand Perz and Verena Pawlowsky, who are exploring the building’s Nazi history. They will make recommendations on how best to preserve the relics for the future, the Jerusalem Post writes, citing Austrian newspaper Der Standard. Image courtesy of Free On Line Photos [Copyrighted free use], via Wikimedia Commons]]>