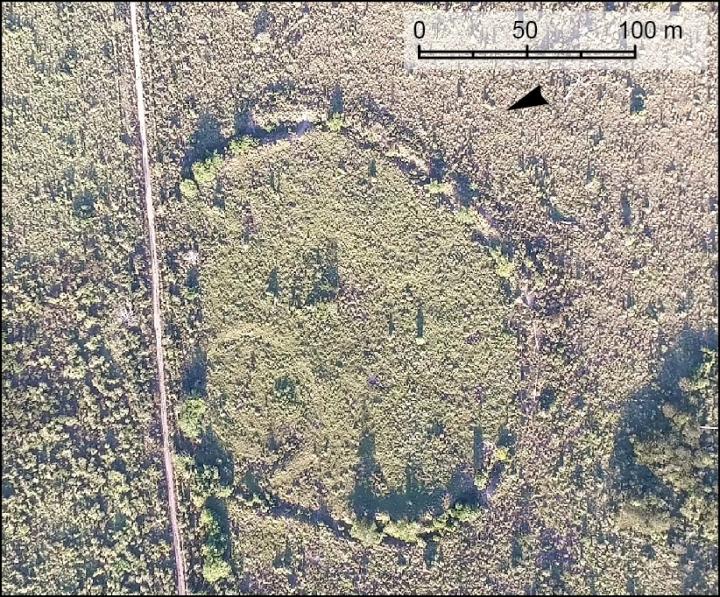 New Amazon Population Revealed Archaeologists have discovered remarkable new evidence that parts of the Amazon long thought uninhabited were in fact home to thriving, diverse populations of up to a million people. The researchers from the University of Exeter have unearthed remains revealing that a 1,800 km stretch of Southern Amazonia was continuously occupied from 1250 until 1600 by people living in fortified villages. Key to the research was the analysis of mysterious earthworks called geoglyphs – man made ditches with strange square, circular or hexagonal shapes. The new study, published in the journal Nature Communications, shows there are an estimated 1,300 geoglyphs across 400,000 square km of Southern Amazonia, with 81 in the area focused on in the latest research. The archaeologists estimate there would have been between 1,000 and 1,500 enclosed villages, with two-thirds of the sites yet to be found. “There is a common misconception that the Amazon is an untouched landscape, home to scattered, nomadic communities,” said Dr Jonas Gregorio de Souza from the University of Exeter’s Department of Archaeology. “This is not the case. We have found that some populations away from the major rivers are much larger than previously thought, and these people had an impact on the environment which we can still find today.” Dr de Souza continued: “The Amazon is crucial to regulating the Earth’s climate, and knowing more about its history will help everyone make informed decision about how it should be cared for in the future.” With large swathes of the Amazon rainforest still unexplored by archaeologists, especially in the areas away from major rivers, the latest discovery is helping fill in gaps in the history of the Amazon. Professor José Iriarte, from the University of Exeter, another member of the research team, said: “We are so excited to have found such a wealth of evidence. Most of the Amazon hasn’t been excavated yet, but studies such as ours mean we are gradually piecing together more and more information about the history of the largest rainforest on the planet “Our research shows we need to re-evaluate the history of the Amazon. It certainly wasn’t an area populated only near the banks of large rivers, and the people who lived there did change the landscape. The area we surveyed had a population of at least tens of thousands.” North America’s Oldest Footprints Discovered 13,000-year-old human footprints have been discovered on Canada’s Pacific coast, the oldest ever found in North America. The finding could have significant repercussions for the history of how North America was populated. It is widely believed that humans migrated to the continent from Eurasia during the last ice age, which ended 11,700 years ago. It is thought they entered on what is now the west coast of British Columbia, however, the search for archaeological evidence has been hindered by the densely forested and difficult to access landscape. Archaeologist Duncan McLaren and colleagues from the University of Victoria, Canada, have spent several years excavating tidal sediments on the shoreline of Calvert Island, British Columbia, searching for traces of human activity. Their findings have now been published in the online open access journal PLOS ONE. They reveal that 29 footprints have been uncovered of at least three different sizes. This suggests that they likely belonged to two adults and a child who were all walking barefoot. Radiocarbon dating has estimated the footprints to be around 13,000 years old. This suggests humans were present on the west coast of British Columbia as it emerged from the last ice age. “The results presented here add to the growing body of information pertaining to the early deglaciation and associated human presence on the west coast of Canada at the end of the Last Glacial Maximum,” the authors write in the introduction to their recently published study. 13,000 years ago, the sea level on the shores of Calvert Island was up to ten feet lower than it is today. Even so, it still would have only been accessible by boat. “[This] implies that the people who left the footprints were seafarers who used boats to get around, gather and hunt for food and live and explore the islands,” Duncan Mclaren, lead study author and anthropologist at the Hakai Institute and the University of Victoria in British Columbia, told the New York Times. Pre-historic Russia-Canada Connection Illuminated With Insect Fossils [caption id="attachment_8580" align="alignnone" width="1440"]

A new species of scorpionfly fossil from 53 million years ago at McAbee, British Columbia named Eomerope eonearctica. This insect is very similar to a fossil species that lived at the same time north of Vladivostok on the Asian Pacific coast, highlighting connections between Canada and Russia in ancient times. Credit: SFU[/caption] A newly discovered, 53 million-year old insect fossil is shining new light on the ancient Canada-Russia connection. Known as a scorpionfly, the insect discovered at the McAbee fossil bed site in British Columbia bears a ‘striking resemblance’ to fossils of the same period from Pacific coastal Russia. “We’ve seen this connection before through fossil plants and animals, but these insects show this in a beautiful way,” said Bruce Archibald, a research associate at Simon Fraser University’s Department of Biological Sciences. “They are so much alike that only the wing colour of the new McAbee species tells them apart.” The new Canadian species has been named Eomerope eonearctica, while its Russian counterpart is Eomerope asiatica, which was first described in 1974. “I’m not aware of any case where two such species so much alike and so close in age have been found in both Pacific Russia and Pacific Canada, and that’s pretty great,” said Archibald. According to Archibald, the insect’s only living relative is found in the temperate forest of central Chile, which has a climate similar to British Columbia’s 53 million years ago. Archibald worked with Alexandr Rasnitsyn, of Moscow’s Russian Academy of Sciences to describe the scorpionfly find. Their research has been published in The Canadian Entomologist. Featured Image: Compound structure with a small enclosure in the interior of a larger one. Credit: University of Exeter ]]>