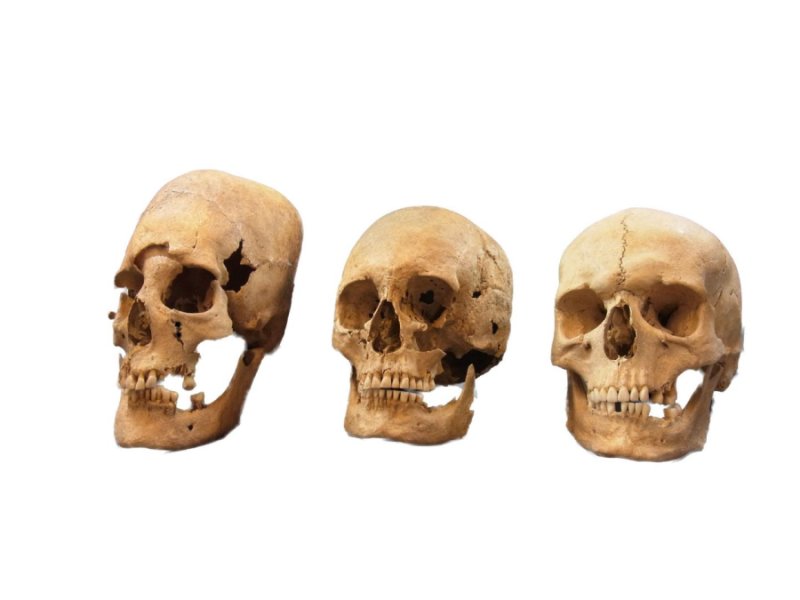 These are strong, intermediate, and non-deformed skulls (from left to right) from the Early Medieval sites Altenerding and Straubing in Bavaria, Germany.
Credit: State Collection for Anthropology and Palaeoanatomy Munich[/caption] In recent years, an international and interdisciplinary team of anthropologists and population geneticists has congregated to explore this transition. The team has now published a palaeogenomic study, which investigates early medieval migration in southern Germany and the peculiar phenomenon of artificial skull deformation. They performed the first genomic analysis of populations that occupied German Bavaria around 500 AD; shedding light on the complex population dynamics of the Völkerwanderung, or Migration Period. Dr Michaela Harbeck from the Bavarian State Collection for Anthropology and Palaeoanatomy (SAPM) teamed up with population geneticist Professor Joachim Burger of Johannes Gutenberg University Mainz (JGU). Working with them were Dr. Krishna Veeramah from US Stony Brook University and colleagues from the UK and Switzerland.

The study, which analysed 40 different inhabitants, revealed that most ancient Bavarians had a genetic similarity to Central and Northern Europeans. But one group had a particularly diverse genetic profile: the female skulls had been artificially deformed into a tower shape. [caption id="attachment_8728" align="aligncenter" width="500"]

Credit: State Collection for Anthropology and Palaeoanatomy Munich. Artificially deformed female skull from Altenerding, an Early Medieval site in Bavaria[/caption] “Parents wrapped their children’s heads with bandages for a few months after birth in order to achieve the desired head shape,” says Dr. Michaela Harbeck. “It is difficult to answer why they carried out this elaborate process, but it was probably used to emulate a certain ideal of beauty or perhaps to indicate a group affiliation.”

Elongated skulls are found in civilisations across history. The earliest written record refers to the Macrocephali, or Long-heads, and dates to 400 BC; though studies have determined its prevalence in cultures for many thousands of years earlier. Dr. Krishna Veeramah, first author of the study, says: “The presence of these elongated skulls in parts of eastern Europe is most commonly attributed to the nomadic Huns, led by Atilla, during their invasion of the Roman Empire from Asia, but the appearance of these skulls in western Europe is more mysterious, as this was very much the fringes of their territory.”

Migrating from east to west

DNA analyses of these skulls revealed that the women migrated to early Bavarian settlements from areas across eastern Europe. As well as their deformed skulls, the women tended to have darker colouring in comparison to the other Bavarians they were living with, who generally had fair hair and blue eyes. “Although there is evidence that there was some genetic contribution from Central Asia, the genomic analysis points to the fact that women with deformed skulls in this region are genetically most similar to today’s south eastern Europeans, and that the Huns likely played only a minor role in directly transmitting this tradition to Bavaria,” Burger says. Those with deformed skulls were not the only women migrating to Bavaria. Two women closely resembling modern Greeks and Turks can also be identified. “Most of these foreign women are found with grave goods that look unremarkable compared to the rest of the buried population,” adds Veeramah. “These cases of female migration would have been invisible from the material culture alone.”

“This is an example of long-range female mobility that bridges larger cultural spaces and may have been a way for distant groups to form new strategic alliances during this time of great political upheaval in the absence of a previous Roman hegemony,” notes Burger. “We must expect that many more unprecedented population-dynamic phenomena have contributed to the genesis of our early cities and villages.” “Interestingly, though our results are preliminary, there are no major traces of genetic ancestry in these early inhabitants of Bavaria that might have come from soldiers of the Roman army,” says Harbeck. “We need to keep investigating on an even broader basis how much Celtic and Roman ancestry is in these early Bavarians.”]]>
Tags: artificial cranial deformationelongated skullsEuropeGermanyMedievalpaleontology
Share 0
Tweet
Share
Share
Share