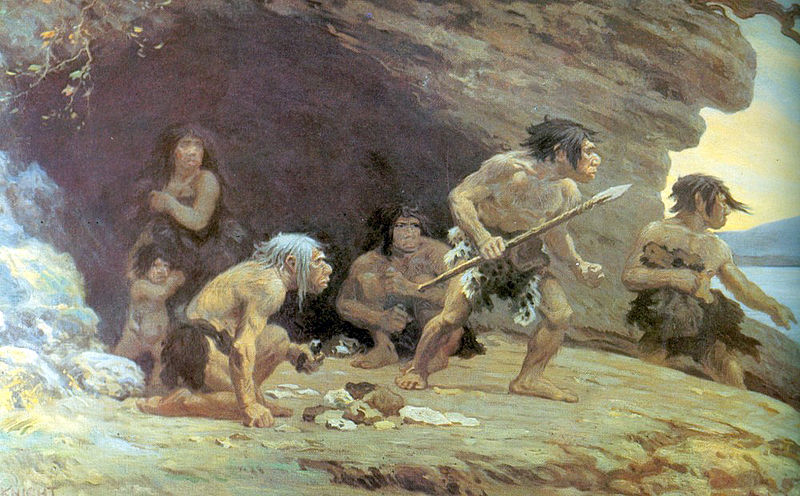 they, and not humans, created the first cave paintings. Now, with an analysis of prehistoric animal remains from Germany, we can deduce that Neanderthals were capable of sophisticated and collaborative hunting strategies. [caption id="attachment_8773" align="aligncenter" width="500"]

Cut marks on the bones of two deer from 120,000 years ago provide the earliest evidence that weapons were used to stalk and kill prey. The findings, published in Nature Ecology and Evolution, used microscopic imaging and ballistics experiments to confirm that at least one of the blows was delivered at low velocity with a wooden spear. Sabine Gaudzinski-Windheuser, a researcher at Johannes Gutenberg-University Mainz, Germany has commented: “This suggests that Neanderthals approached animals very closely and thrust, not threw, their spears at the animals, most likely from an underhand angle.” “Such a confrontational way of hunting required careful planning and concealment, and close cooperation between individual hunters,” she continues.

A brief history of the Neanderthals

Neanderthals occupied areas in Europe from around 300,000 years ago. They died out 30,000 years ago, when they were overtaken by humans. For a long time, it was considered that Neanderthals simply lacked the intelligence to compete with humans, but evidence such as this new study has turned that argument on its head. For instance, it was thought that Neanderthals lacked symbolic culture; but as we now know, they were creating cave paintings 20,000 years before humans arrived in Europe. Similarly, they buried their dead in a ritual fashion, proving a symbolic culture in itself. New Historian has previously published a study on the differences between the Neanderthals and humans, which you can read here. [caption id="attachment_8774" align="aligncenter" width="500"]

A model an adult Neanderthal male head and shoulders on display in the Hall of Human Origins in the Smithsonian Museum of Natural History in Washington, D.C. Credit: Tim Evanson[/caption]

Hominins, which include both early human species as well as our own, are likely to have hunted with weapons more than 500,000 years ago. 300-400,000 year old wooden staves have been found in England and Germany, and are the oldest known spear-type implements that could have been used to kill prey. However, with no physical evidence that they were indeed used for hunting, scientists have speculated. This new finding removes any doubt: these were hunting tools. “As far as spear use is concerned, We now finally have the ‘crime scene’ fitting to the proverbial ‘smoking gun’,” Gaudzinski-Windheuser says. Excavations from nearby sites have provided us with tens of thousands of bones from huntable animals such as deer, horses and bovids. Thousands of stone artefacts also found nearby help to paint the picture of a flourishing Neanderthal forest lifestyle between 135,000 and 115,000 years ago. Despite having been discovered around 20 years ago, these deer bones have now been examined with new technologies. They have allowed us to tell which injuries were fatal, the kind of weapon used and what kind of distance there was between the hunter and his prey. Annemieke Milks, a researcher at the Institute of Archaeology at University College London writes in Nature Ecology and Evolution: “the ballistics work is experimental archaeology at its best”.]]>
Tags: EuropeGermanyNeanderthalpre history
Share 0
Tweet
Share
Share
Share