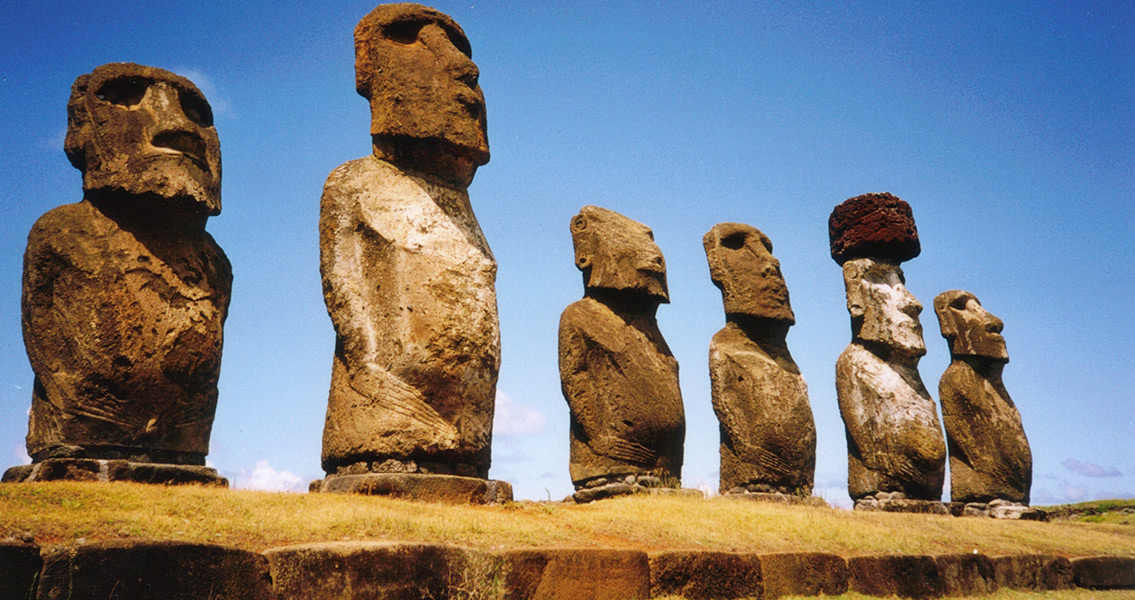 Field Museum scientist Laure Dussubieux was one of the study’s authors. “For a long time, people wondered about the culture behind these very important statues,” she says. “This study shows how people were interacting, it’s helping to revise the theory.” Lead author Dale Simpson Jr., an archaeologist from the University of Queensland adds: “The idea of competition and collapse on Easter Island might be overstated… To me, the stone carving industry is solid evidence that there was cooperation among families and craft groups.” [caption id="attachment_8696" align="aligncenter" width="800"]

The history of Easter Island

People first arrived on Easter Island around 900 years ago. The society was later scourged by colonists and slavers, but the Rapa Nui culture has persisted. According to oral tradition, the founding population was two canoes led by the island’s first chief. Over the years, the population rose to reach a number of many thousands, making up the complex society that carved the famous Easter Island statues, or moai.

Although the moai are colloquially known as ‘the Easter Island heads,’ they are actually full-body figures that have been part-buried over time. There are nearly a thousand of the statues, with the largest standing at 70 ft tall. “Ancient Rapa Nui had chiefs, priests, and guilds of workers who fished, farmed, and made the moai. There was a certain level of sociopolitical organisation that was needed to carve almost a thousand statues,” says Simpson.

Recent excavations of four statues were conducted by Jo Anne Van Tilburg of Cotsen Institute of Archaeology, UCLA and director of the Easter Island Statue Project, along with her Rapa Nui excavation team. Van Tilburg worked with Simpson and Dussubieux to analyse 21 of roughly 1,600 stone tools discovered in the excavations. Around half were fragments that suggested how they were used, giving us a better understanding of the society that erected the statues.

For Van Tilburg, the goal of the project was to gain a better understanding of how tool makers and statue carvers may have interacted, thus gaining insight into how the statue production industry functioned. Dussubieux explains: “We wanted to figure out where the raw materials used to manufacture the artefacts came from… We wanted to know if people were taking material from close to where they lived.” The results pointed to a society that involved consistent collaboration. “The majority of the [tools] came from one quarry complex–once the people found the quarry they liked, they stayed with it,” says Simpson. “For everyone to be using one type of stone, I believe they had to collaborate. That’s why they were so successful–they were working together.”

An interactive society from day one

This level of large-scale cooperation flies in the face of the popular narrative that Easter Island’s inhabitants warred themselves into extinction after running out of resources. Van Tilburg urges caution in interpreting the study’s results. “The near exclusive use of one quarry to produce these seventeen tools supports a view of craft specialization based on information exchange, but we can’t know at this stage if the interaction was collaborative. It may also have been coercive in some way. Human behaviour is complex. This study encourages further mapping and stone sourcing, and our excavations continue to shed new light on moai carving.” Simpson says: “There’s so much mystery around Easter Island because it’s so isolated, but on the island, people were, and still are, interacting in huge amounts.”]]>
Tags: archaeologychileEaster IslandRapa Nui
Share 0
Tweet
Share
Share
Share