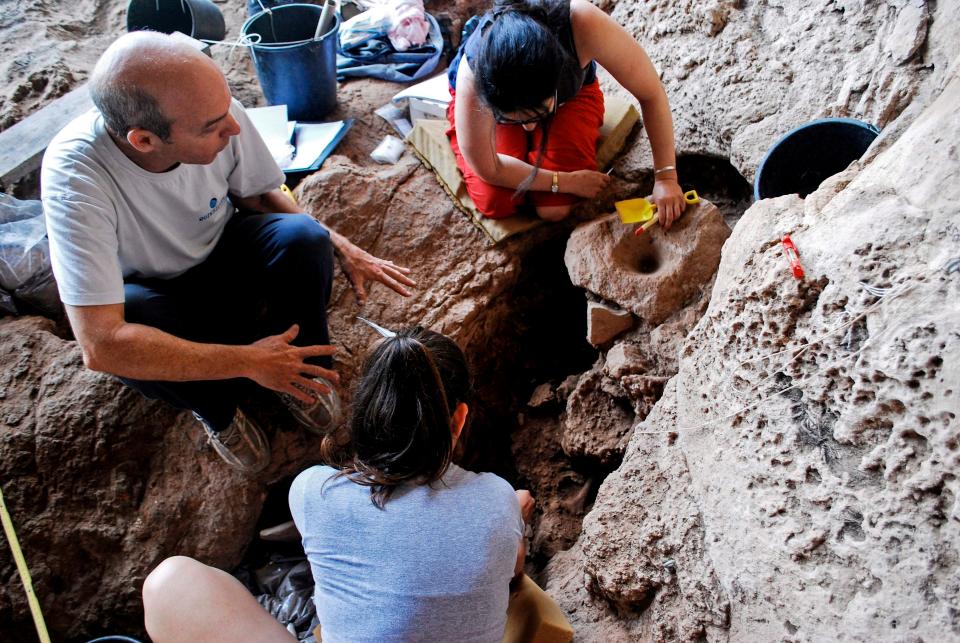 Archaeologists at the beer-making site in a cave near Raqefet, Israel
Photo credit: AFP[/caption]

Who were the Natufians?

The Natufians were semi-sedentary foraging people, living in the Eastern Mediterranean between the Palaeolithic and the Neolithic periods (after the last Ice Age). As part of their rituals, they collected locally available plants, stored malted seeds and made beer.

A vivid and colourful picture of Natufian ways

Prof. Dani Nadel, Zinman Institute of Archaeology, University of Haifa, Israel, was on the excavation team: “The Natufian remains in Raqefet Cave never stop surprising us. “We exposed a Natufian burial area with about 30 individuals; a wealth of small finds such as flint tools, animal bones and ground stone implements, and about 100 stone mortars and cup marks. “Some of the skeletons are well-preserved and provided direct dates and even human DNA, and we have evidence for flower burials and wakes by the graves. “And now, with the production of beer, the Raqefet Cave remains provide a very vivid and colourful picture of Natufian lifeways, their technological capabilities and inventions.” The results of the study indicate that the Natufians exploited over seven types of plants associated with the mortars. That includes wheat or barley, oat, legumes, and bast fibres like flax. They would then pack plant foods in fibre-made containers and store them in boulder mortars. Bedrock mortars would be used to brew wheat and barley based beer, which would then have likely been served in ritual feasts. [caption id="attachment_8893" align="aligncenter" width="500"]

This is the site location and artefacts analysed. (A) The location of Raqefet Cave and three additional Natufian sites in Mt. Carmel; (B) field photos of the studied boulder mortars (BM1,2) and the location of BM3 on the cave floor (scale bar and arrow: 20 cm); (C) a functional reconstruction of the mortars: a boulder mortar used to store plants in a basket with a stone slab on top, and a bedrock mortar used for pounding and cooking plants and brewing beer. Photo credit: Dror Maayan; Graphic design credit: Anat Regev-Gisis[/caption]

Fleshing out our understanding of Natufian society

In July, experts discovered the remnants of what may have been the oldest bread ever baked in Jordan at a site occupied by the Natufian people 14,400 years ago. The fact that beer was brewed at Raqefet Cave 13,000 years ago fleshes out our understanding of Natufian social and ritual realms. It is thought that the brewing of beer inspired people to cultivate cereals in southern Levant – supporting a hypothesis proposed by archaeologists more than 60 years ago.]]>
Tags: archaeologyBeerIsrael
Share 0
Tweet
Share
Share
Share