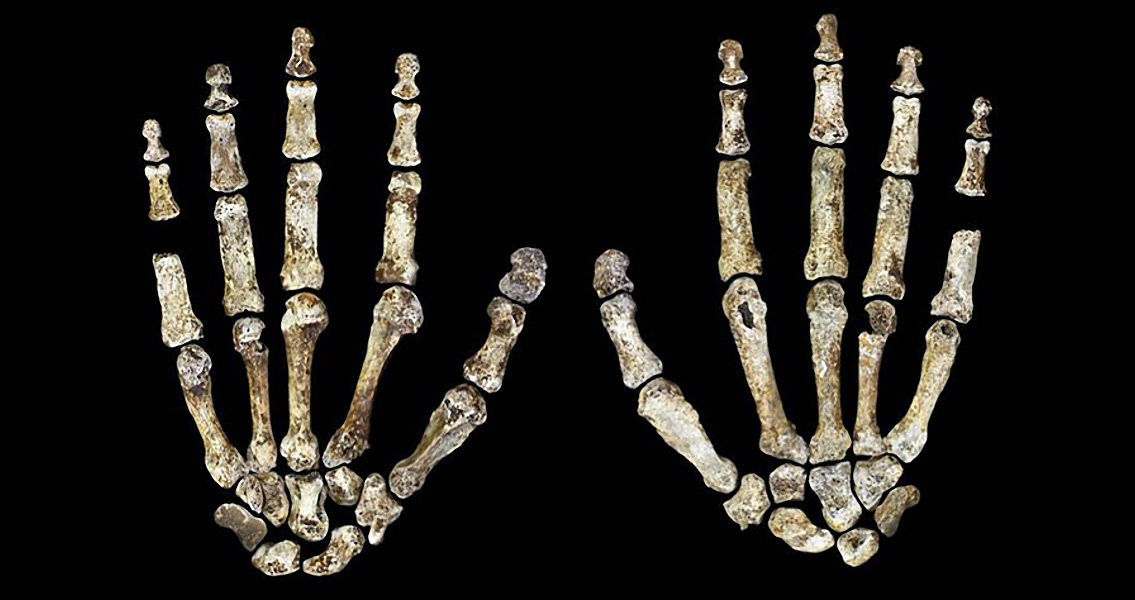 Homo naledi, was among our earliest ancestors and probably lived around three million years ago. The earliest human ancestors to date are believed to have been Ardipithecus ramidus, which, the BBC writes, probably lived around 4.4 million years ago, and based on the fossil record could both walk up right and climb trees. This H. naledi, the researchers explain, was ape-like in many ways but also had some features in common with modern humans. The skeleton found in the Rising Star cave resembled in size that of a modern human child, especially the skull, teeth and feet. It belonged, however, to an elderly female. The shoulders and pelvis were ape-like, and its brain size was likely similar to that of a gorilla. The reason it was classed as a hominin was the more advanced shape of the skull, the longer legs, the smaller teeth and the modern-like feet. The chamber in which this first skeleton was found was difficult to access because it was in the deepest recesses of the cave and one had to be quite slim to be able to pass through a constriction on the way. Yet once a team was gathered, work started and the researchers discovered something even more exciting: the chamber contained not just one remarkably well preserved skeleton but as many as fifteen, of all ages and sizes. The total number of specimens collected after three weeks of excavation reached 1,550. The scientists that analysed the fossils and tried to place them along the line of human lineage had a tough job. Some of the bones, like the tiny skulls, suggested these were apes, but others were too human-like to ignore. The conclusion was that this species lived some time between Australopithecines and Homo, Berger told the National Geographic, although he added that for him personally, these creatures belonged closer to Homo than Australopithecus. Then there is the much more fascinating question of how all these people ended up in that remote chamber of the Rising Star cave (the name of the species, by the way comes from the Sotho word for “star”). There was no fauna, tools or any other artefacts around them to suggest it was a dwelling, and there were no tooth marks on the bones, which would have been the case had they been dragged here by carnivores. One possible explanation is that they wandered into the cave and got trapped in the remote chamber but the position of the skeletons didn’t corroborate that hypothesis. The other could cause a rethinking of the fundamental link between brain size and evolution: it is the suggestion that this chamber was a burial ground, where bodies were deposited over a period of centuries. In other words, that this early species, despite its small head, was capable of allocating a special place to bury its dead, a tradition so far only found in much later hominins and up until now considered too complex behaviour to be found in such earlier species. Commenting on the news, anthropologist Isabelle Winder from the University of York, who wasn’t involved in the study, said: “Look at the hind limb of H.naledi and you will see a collection of features associated with upright stance. The forelimb, however shows ape-like characters. This may suggest that the Savannah Hypothesis, which emphasises life in Savannah mosaics, may be an incomplete explanation of human locomotion. H.naledi was a scrambler, living in complex landscapes.” Nick Winder from Newcastle University told New Historian that “If you compare the naledi material with the Dmanisi skeletons (a site in Georgia where a number of different early hominin fossils were found a few years ago) you make two striking observations. The first is that the naledi assemblage is described as morphologically homogenous — all the specimens look similar. At Dmanisi, however, there is a lot of morphological variation. Second, the mosaics of attributes in the two collections are very different. This suggests much more variability than one might have expected. There were clearly lots more ways of being a successful hominin than we imagined.” For more information: Homo naledi, a new species of the genus Homofrom the Dinaledi Chamber, South Africa]]>