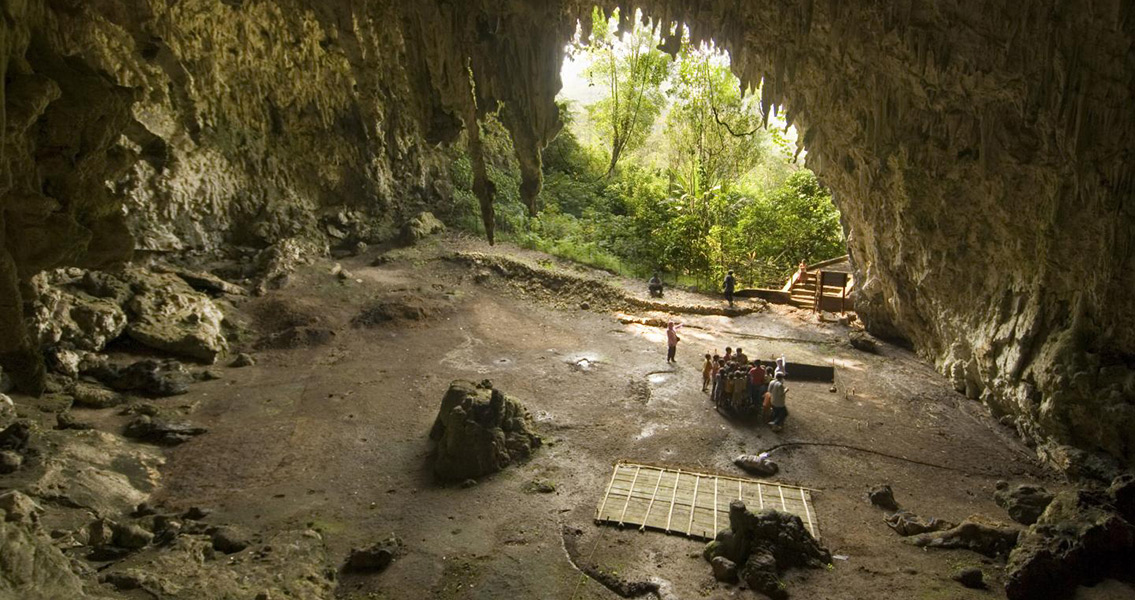 Homo floresiensis, the extinct ‘hobbit’ species of human. Published in the Journal of Archaeological Science, the new study presents evidence that modern humans (Homo sapiens) were likely using fire at Liang Bua 41,000 years ago. It’s a conclusion that narrows the gap between the disappearance of Homo floresiensis and the arrival of the first modern humans on the Island of Flores, and could provide new insight into the fate of H.floresiensis. Called the discovery of the century, the first H.floresiensis remains were unearthed in the Liang Bua cave on Flores in 2003. Surrounded by stone tools and animal remains, the female H.floresiensis would have been 3.5 foot (1.06 metres) tall and thirty years old at the time of her death. Subsequent discoveries of eight similarly diminuitive individuals led scientists to conclude in a study published in 2009 that the initial discovery had not been an anomally. The latest discovery on the Island of Flores provides some of the earliest evidence yet found of the presence of modern humans in South East Asia. Lead author of the study Dr Mike Morley, a research fellow and geoarchaeologist at UOW’s Centre for Archaeological Science (CAS), said the discovery could be “extremely important” in the mission to determine how and why the hobbit species disappeared, roughly 50,000 years ago. In March, a study published in the journal Nature revised the initial dating estimates for the original hobbit skeleton, concluding the bones were between 190,000 and 60,000 years old, much older than previous studies that claimed the creature survived on Flores until as recently as 12,000 years ago. With the most recent stone tools on the island dated to 50,000 years old, scientists were suddenly presented with a glaring gap in the chronology of the site’s sediment sequence: What happened there, and who lived there between 46,000 and 20,000 years ago? Dr Morley and colleagues, including CAS geoarchaeologist Professor Paul Goldberg and archaeologist Thomas Sutikna, have now been able to fill in some of that gap. On top of detailing environmental changes at the site between 190,000 and 20,000 years ago, they found evidence of fire places that were in use between 41,000 and 24,000 years ago. With no evidence that H.floresiensis used fire in their 130,000 year occupation of the site ever discovered, Morley’s team believe these fire places were most likely the work of modern humans. “We now know that the hobbits only survived until around 50,000 years ago at Liang Bua. We also know that modern humans arrived in Southeast Asia and Australia at least 50,000 years ago, and most likely quite a bit earlier” Dr Morley said in a press release from UOW. “This new evidence, which is some of the earliest evidence of modern human activity in Southeast Asia, narrows the gap between the two hominin species at the site.” A technique known as micromorphology was part of the team’s study, allowing sediments from the site to be examined in microscopic detail. Sediment blocks from the rear of the cave, an area separate from where the fossils were discovered, were extracted and shipped to UOW. Wafer thin slices (just 30 microns thick) were studied under microscopes, subjected to spectroscopic analyses and radiocarbon dated to determine the age of each layer. The team’s findings add further support to the idea that modern humans dispersed through South East Asia and Australia around 50,000 years ago. The researchers at Liang Bua are now looking for more evidence to narrow the time gap between modern humans and H.floresiensis; allowing them to decipher exactly when humans first inhabited the island, and perhaps even revealing a cross over between the two species. Image courtesy of University of Wollongong]]>