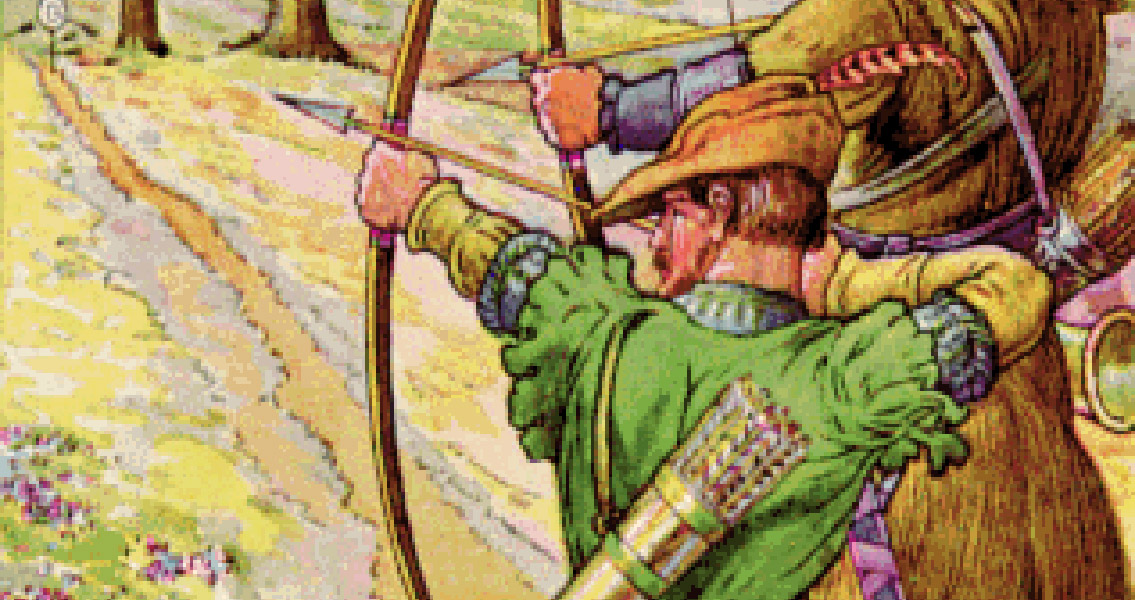 The Vision of Piers Plowman, contains the earliest known mention of Robin Hood, “I kan nought parfitly my Paternoster as the preest it syngeth, But I kan rymes of Robyn Hood and Randolf, Erl of Chestre.” Although the reference in Langland’s poem is vague: it is far from clear whether ‘Robyn Hood’ and ‘Randolf Erl of Chester’ are connected in someway or if the ‘rymes’ are from unconnected traditions, it does at least show that a character by the name of Robin Hood had entered the popular imagination by this point. Going back even earlier, historians have found evidence in thirteenth century English legal records of criminals being labelled with the epithets “Robehod” or “Rabunhod”. Crucially, this highlights that contrary to the heroic, romanticised Robin Hood depicted in recent movies which fall into simple narratives of good versus evil, the name was initially synonymous with violence and crime. The high minded rebel who stole from the rich to give to the poor is a more recent construction. Fourteenth century ballads describe a violent yeoman who lived in Sherwood forest and clashed with the Sheriff of Nottingham. Later, perhaps in the wake of events such as baronial rebellions and the 1381 Peasants’ Revolt, the ballads of Robin Hood started to take on their philanthropic edge. One of the earliest recorded about Robin Hood: The Lyttle Geste of Robyn Hode, concludes with the line that he “did poor men much good”. In a time of growing discontent at the feudal system, it’s likely that stories of a man who challenged the forces of law and order became increasingly appealing. Through the centuries the stories of Robin Hood twisted, changed and evolved to the point it has become almost impossible to determine when the rebellious outlaw was supposed to have carried out his daring acts, let alone if he ever really existed. Sixteenth century historian John Major’s ‘History of Great Britain’ depicts Robin Hood as a follower of King Richard I (1157 – 1199). It describes him as a fallen nobleman who defied Richard’s cousin King John while the rightful king was imprisoned. This is a narrative of Robin Hood’s life that is hugely popular now, however, Major was the first to describe it. Earlier accounts placed Robin Hood in different times and regions, while court rolls from the fourteenth century describe a number of ‘Robin Hoods’ active during the reign of Edward II (1284 – 1327). Whereas some historians suggest that the whole story of Robin Hood could be traced back to one real individual (with a number of candidates as to who this person was and when he lived), others suggest that he was an amalgamation of a number of people. As historian David Baldwin told History Extra last year, although Robin Hood was an invented hero, “There were men like Robin Hood, however, such as fugitives who flouted the harsh forest laws [unpopular laws that retained vast areas of semi-wild landscape over which the king and his court could hunt], and these fugitives were largely admired by the oppressed peasantry.” Beyond its origins, Robin Hood is a folklore tradition that has evolved and expanded with the times, developing in sync with changes in society and reflecting the cultures who tell the story as much as the one from which it originated. ]]>