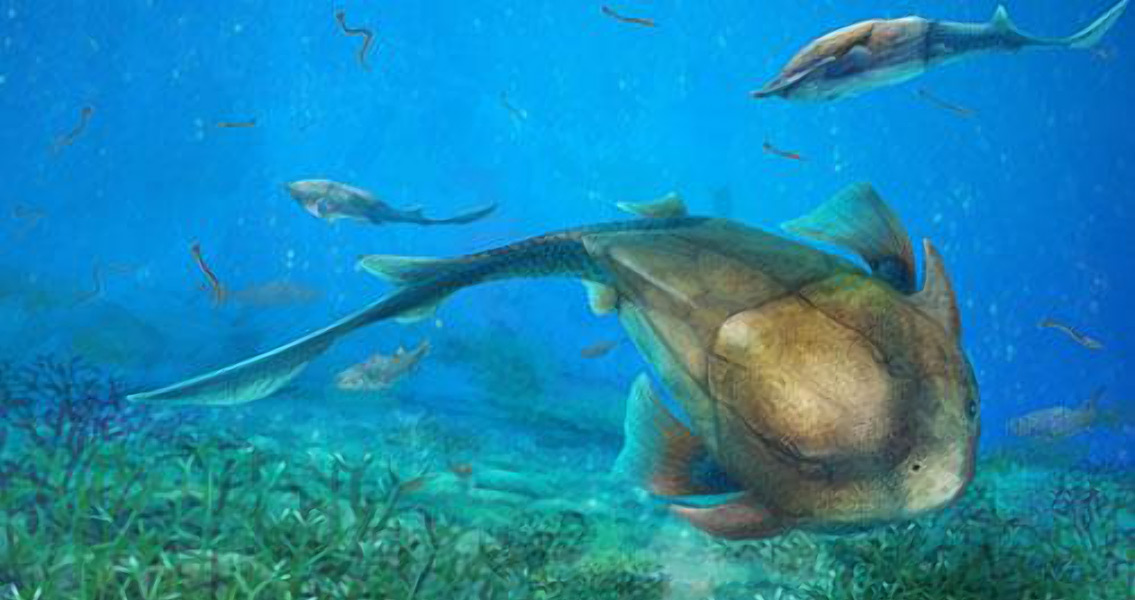 Qilinyu rostrate, a fish-like Silurian placoderm species, has led to new information regarding the evolution of the jaw in vertebrate species. The roughly 423 million year old fossil is approximately 126 millimeters in length – with an estimated total body length for the creature of 20cm – and is associated with several different species including the Guiyu and Megamastax (classified as osteichthyans), the Entelognathus (a maxillate placoderm) and the Dunyu (a galeaspid). Osteichthyans, which include tetrapods and bony fish species, have facial and bone structure differences when compared to placoderms. The discovery of Entelognathus revealed a placoderm with many facial characteristics more suited to osteichthyans, but the relationship between Entelognathus’ development and the rest of the placoderms from the same time period remained uncertain until this new discovery. According to a recently published research study by the Chinese Academy of Sciences, Sweden’s Uppsala University, and the Institute of Vertebrate Paleontology and Paleoanthropology of Beijing, the new Qilinyu fossil bridges the gap between placoderms such as Entelognathus and osteichthyans. The new specimen, according to the team of international researchers, has dentary, premaxilla, and maxilla structures that are constructed in the same way as the gnathal plates of less advanced placoderms while also predating the addition of certain lower jaw bones that characterized the evolutionary move away from gnathal jaws to maxillate ones. According to Uppsala University professor Per E. Ahlberg, one of the authors of the new study, examining the jaw bones of both Qilinyu and Entelognathus reveals that both fish species combine the characteristics of placoderm gnathal plates and bony fish jaw bones. Extrapolating from these findings, Professor Ahlberg remarked that if gnathal plates from placoderm species represented an inner jaw arcade that was similar to certain bones of bony fish species, there would be an expectation to find gnathal plates in distinct locations in Qilinyu and Entelognathus. With no evidence of these gnathal plates, the professor states that one interpretation of this is to conclude that the jaw bones of humans are lightly remodeled gnathal plates of placoderms, accomplished through several hundred million years of evolutionary process. Based on the team’s findings, Professor Ahlberg remarked that it looks as if substantial anatomical details of humanity can be traced back even beyond early bony fish species, into the Silurian period in the form of these “ungainly” placoderm species. The scientific community has largely agreed with the team’s findings, with John Long, the Society of Vertebrate Paleontology’s president and professor from Australia’s Flinders University, commenting that the new insights into Qilinyu help to fill a large gap in the evolution of vertebrate jaws. The new research study, published recently in the journal Science, can be found online here Image drawn by YANG Dinghua]]>