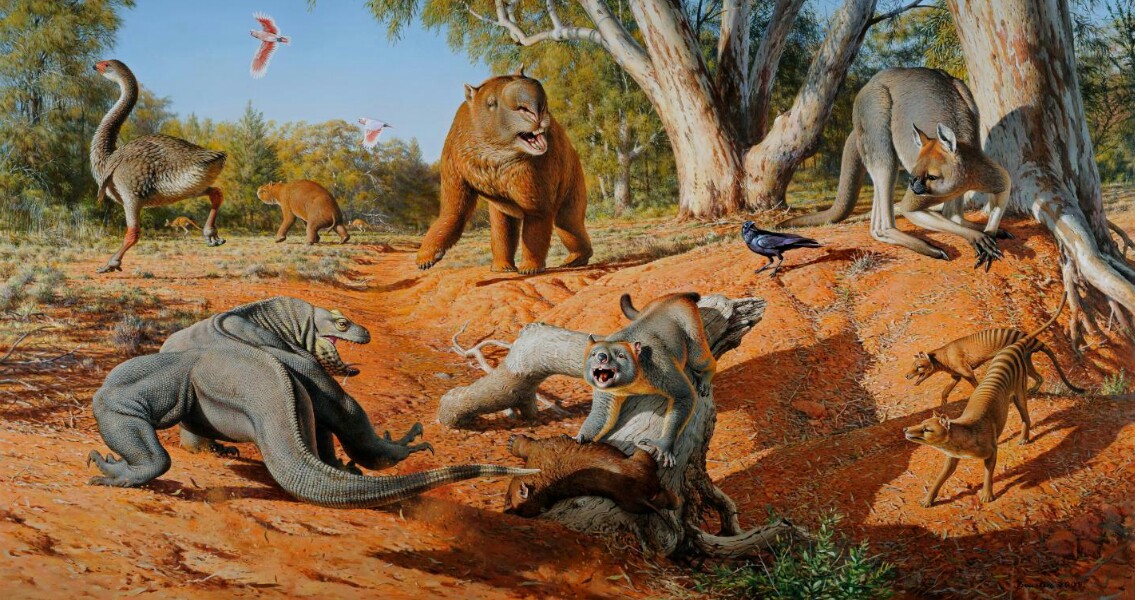 Nature Communications places the blame firmly on humans. Typically, explanations for the extinction of Australian megafauna have focused on either climate change or hunting by humans. The new study, led by scientists from Monash University in Victoria, Australia and the University of Colorado Boulder, has used the ancient faeces left behind by the megafauna to reach its conclusion. The team used a sediment core drilled from the Indian Ocean off the southwest coast of Australia to reconstruct past climate and ecosystems on the continent. The sediment core contains chronological layers of material blown into the ocean including ash, dust, pollen and spores from a fungus known as Sporormiella which thrived on the dung of plant eating mammals. Analysis of the sediment revealed that spores from Sporormiella were in abundance from 150,000 years ago, until plummeting around 45,000 years ago. “The abundance of these spores is good evidence for a lot of large mammals on the southwestern Australian landscape up until about 45,000 years ago,” said Professor Gifford Miller from CU Bolder’s Department of Geological Sciences, one of the study’s authors. “Then, in a window of time lasting just a few thousand years, the megafauna population collapsed.” According to Miller, the study results suggest that shortly after the arrival of humans 85 percent of Australia’s megafauna weighing over 100 pounds went extinct. Tellingly, the sediment core analysis also revealed that Australia’s southwest had dense forests 45,000 years ago, much like it does today. A hotbed of biodiversity, these forests make it unlikely that ecosystem change was behind the extinction of the megafauna. “It’s a region with some of the earliest evidence of humans on the continent, and where we would expect a lot of animals to have lived,” Miller explained. “Because of the density of trees and shrubs, it could have been one of their last holdouts some 45,000 years ago. There is no evidence of significant climate change during the time of the megafauna extinction.” Miller suggests that “imperceptible overkill” could have caused the extinction. A study published in 2006 claimed that even a small amount of megafauna hunting, at a rate as low as one juvenile mammal being killed per person per decade, could well have led to a species going extinct within a few hundred years. “The results of this study are of significant interest across the archaeological and Earth science communities and to the general public who remain fascinated by the menagerie of now extinct giant animals that roamed the planet – and the cause of their extinction – as our own species began its persistent colonization of Earth,” said study leader Sander van der Kaars of Monash University. The issue of the cause behind Australian megafauna extinction is likely to remain controversial, however. Just last week a study was published arguing that humans and certain megafauna coexisted for a least 17,000 years in Australia, highlighting just how complicated the extinction process might have been. Image courtesy of Peter Trusler, Monash University]]>