BREAKING NEWS
GMT+2 11:05
Home Breaking News History News of the Week – New Insights on the fate of the Rapa Nui 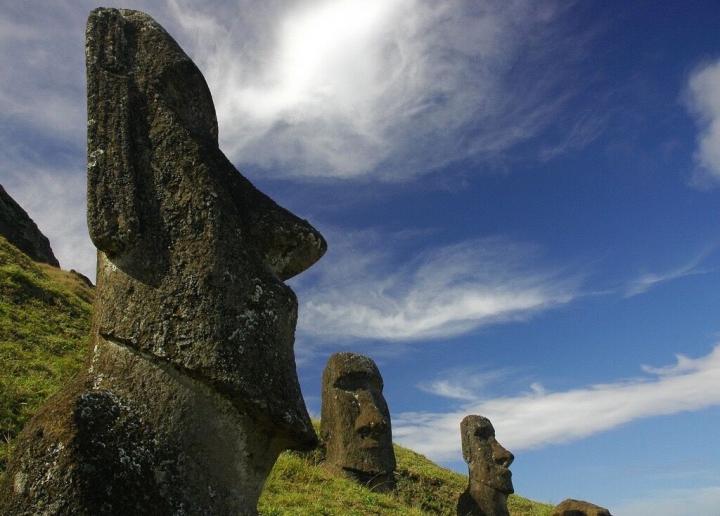 Easter Island mystery – ‘Ecocide’ didn’t lead to the Rapa Nui’s demise New scientific research is challenging the popular belief that the ancient inhabitants of Rapa Nui, aka Easter Island, were wiped out due to over exploitation of natural resources. It is often proposed that the Rapa Nui islanders cut down giant forests of palm trees on Easter Island, leaving them without wood to build canoes for fishing. The theory states that the absence of fish forced them to eat chickens, rats and agricultural crops. The island’s climate and infertile soil meant crop productivity started to decrease as the island’s inhabitants ate more and more. Conflict erupted as competition arose over the dwindling resources, and the population essentially wiped itself out through having destroyed the island’s ecosystem, a theory of their fate dubbed ‘ecocide’. New research from scientists at the University of Bristol, published in the American Journal of Physical Anthropology, is throwing the ecocide theory into question, showing through isotopic analysis of bones, soils and plant remains from Rapa Nui that the population had a diet of equal parts seafood and terrestrial food. Catrine Jarman, lead author of the study and PhD student at the University of Bristol’s Department of Anthropology and Archaeology, said: “We also discovered that agricultural crops consumed must have been planted in soils that were deliberately managed and manipulated to provide better yields. “Previous work has shown that plants of Rapa Nui were grown in rock mulch gardens and planting enclosures known as manavai. These had been carefully constructed and deliberately managed, and our study showed that the islanders may have added fertilisers.” Put simply, the new results suggest the Rapa Nui islanders adapted to the island’s harsh environmental conditions by managing their gardens and manipulating soils for better crops. Contrary to the idea of this ancient people recklessly wiping out the environment that had sustained them, it shows they demonstrated astute environmental awareness and stewardship to overcome nutrient poor soils. Jarman concluded: “This research highlights the unique and varied environmental adaptations that Pacific Islanders have shown through time. “Polynesians developed sustainable economies in ways that we are now better understanding through interdisciplinary research. Lessons from the past and from traditional island societies have value and relevance today.” Ancient Greek theatre had a wooden stage thousands of years ago An investigation by a Japanese architectural researcher suggests a high possibility that a wooden stage existed in the theater of the ancient Greek City of Messene during the Greek Classical period (ca. 369 BCE). During the Messene theatre’s 2007 excavation, a large storage room and three stone rows were discovered beside the stage by a group from the History of Western Architecture Laboratory of Kumamoto University. Similar features had also been discovered in Ancient Greek theatres at Megalopolis and Sparta. After studying the three sites in depth, a Kumamoto University researcher determined the stone rows remaining in the Megalopolis theater would have been used to set up wooden background picture panels, and the stage storage room would have likely been the custodian of such panels. In Hellenistic theatre, a one-story construction known as a proskenion was installed on the stage as background, behind which was another two story construction known as a skene that served as both a dressing room for actors and additional stage background. Traditionally, it’s been assumed that the skene and proskenion were wheeled around the stage as a single, large construction. The new research however, suggests they might have been moved separately. “A large force would have been required to move stage equipment as large as the proskenion and skene,” said Associate Professor Ryuichi Yoshitake who led the research project. “In previous studies, there was a theory that the proskenion and skene were simultaneously moved along just three stone rows, but I think it is more logical that the proskenion and skene each had their own set of two stone rows to move along. I came to this conclusion due to the positions of three stone rows and the fact that it would have been quite difficult to move the heavy proskenion and skene together using a single axle with three wooden wheels.” The findings have been published in the German language science journal Archäologischer Anzeiger. A new method to chart humans’ domestication of seeds Scientists from University College London have used synchrotron light to document for the first time the rate of evolution of seed coat thinning, a major mark of crop domestication, from archaeological remains. It marks the first-time scientists have been able to measure coat thickness throughout an entire seed. Published in the journal Science Reports, the authors present evidence for seed coat thinning between 2,000 BCE and 1,200 BCE in the legume horsegram (Macrotyloma uniflorum), a bean commonly eaten in southern India. “Seed coat thickness is a great indicator of domestication, as thinner coats will mean faster germination of a seed when it is watered,” explained Dorian Fuller, co-author on the paper. “But conventional methods of looking at the seed coat require breaking and destroying archaeological specimens.” “Being able to look at the seed coat thickness without breaking the sample is possible by other methods, but you can only look at a spot on the seed,” added Charlene Murphy, co-author on the paper. “The beamline at Diamond has allowed us to look at the entire seed, and has shown considerable variation within individual specimen’s seed coat thickness.” The team’s results suggest that domestication of horsegram took place during the second millennium BCE, with seed coats fairly fixed in thickness by the early centuries CE. The findings also suggest that the high-resolution X-ray computed tomography method could be used to study a variety of domesticated grains and pulses. Featured image: New isotopic analyses of bones, soils and plant remains from Rapa Nui, Chile (Easter Island) provide evidence contrary to the widely-held belief that the ancient civilization recklessly destroyed its environment. Courtesy of Terry Hunt ]]>