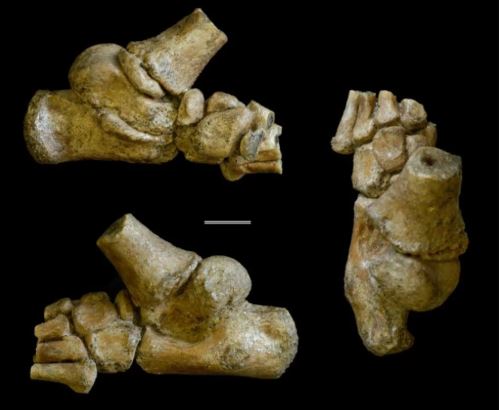 Discovered in 2002 by Zeresenay Alemseged, a professor of organismal biology and anatomy at the University of Chicago, the foot is about the size of a modern human’s thumb. Astonishingly, it is part of an almost complete skeleton of a young female Australopithecus afarensis living 3.32 million years ago in the Dikika region of Ethiopia. “This is the most complete foot of an ancient juvenile ever discovered,” Desilva says. “For the first time, we have an amazing window into what walking was like for a two-and-a-half-year-old, more than 3 million years ago.”

“On the cusp of being human”

Alemseged is a world leader in palaeontology, specialising in the study of human origins and our evolution. He contributed to the study as a senior author. “Placed at a critical time and the cusp of being human, Australopithecus afarensis was more derived than Ardipithecus (a facultative biped) but not yet an obligate strider like Homo erectus. The Dikika foot adds to the wealth of knowledge on the mosaic nature of hominin skeletal evolution” explains Alemseged. The fossil record shows that these ancient ancestors were adept at walking upright. Desilva adds: “Walking on two legs is a hallmark of being human. But, walking poorly in a landscape full of predators is a recipe for extinction.” [caption id="attachment_8792" align="aligncenter" width="230"]

A relative of the Lucy fossil?

The fossil of the toddler’s foot is not only the same species as the famous Lucy fossil, but was also found in the same vicinity in Ethiopia. Unsurprisingly, this led to it being erroneously called ‘Lucy’s baby’ by the popular press – despite this toddler having been around 200,000 years before Lucy.

What we know about the toddler’s lifestyle

With a remarkably preserved anatomy, the fossil foot has given the research time invaluable insight into the daily lifestyle of this toddler. After an examination into how the foot developed and what this tells us about human evolution, it can even start to tell the story of how our ancestors survived. At just two and a half years of age, this Dikika child was already walking on two legs. However, findings also suggest that she was still spending time in the trees, foraging for food while clinging to her mother. “If you were living in Africa 3 million years ago without fire, without structures, and without any means of defence, you’d better be able get up in a tree when the sun goes down,” adds DeSilva. Accordingly, the base of the big toe and the skeletal structure surrounding it suggests that vulnerable children spent more time in the trees than their adult carers. “These findings are critical for understanding the dietary and ecological adaptation of these species and are consistent with our previous research on other parts of the skeleton especially, the shoulder blade,” Alemseged notes.]]>
Tags: anthropologyarchaeologyevolutionfossilhuman evolutionpaleontology
Share 0
Tweet
Share
Share
Share