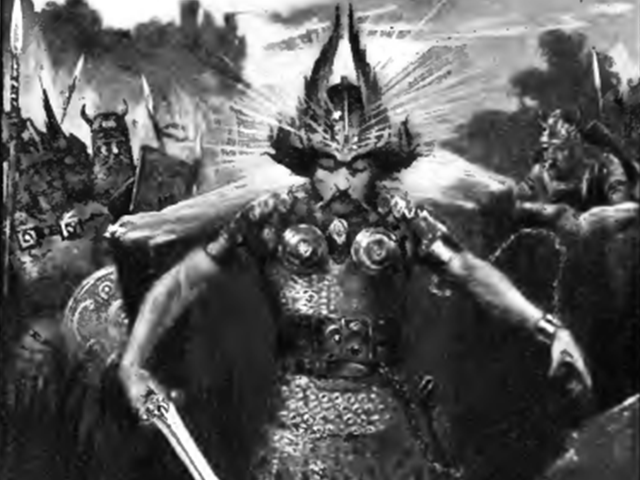 Bad Vs. Good: Two Sides of the Same Coin

The villains play an ungrateful role, and ironically, sometimes their only purpose is to make the hero more appealing. The battle of good vs. evil, light vs. dark, hero vs. villain is as old as time itself. There are many examples of that in folklore, mythology, religion and literature of all cultures. There are numerous references in the Bible, Torah, and Quran which address that subject. Interestingly enough, even though there were and there still are many civilizations, cultures, countries and languages, that particular battle seems to be rather universal. The only thing that changes are the names, locations and the circumstances, but the core of it remains the same. If we were to perform a more thorough research on a single example, we would find that it probably has a similar counterpart in a different culture, under a different name. Of course, this can also be due to the fact that when a new culture suppresses the old one, it inherits some of its characteristics as well. For example, there are many examples of pagan beliefs that were carried over into Christianity. One of the oldest legends which depicts the age-old battle of good vs. evil is the story of Beowulf. Beowulf is an Old English epic poem about the eponymous hero, set in Scandinavia, and is considered one of the most important works of Anglo-Saxon literature. Beowulf, the hero of the Geats, comes to the aid of Hrothgar, the king of the Danes, whose great hall, Heoroth, is being terrorized by a vicious monster named Grendel. In addition to Grendel, Beowulf also has to battle Grendel’s mother and a dragon. Each of these is used to develop the characterization of our hero further, each one presenting a unique set of challenges he has to overcome, displaying his best qualities. Beowulf is a classic example where establishing a dichotomy between a hero and a villain is used to infuse life in both the hero and the villain, making them more complex and real, as opposed to just treating them as polar opposites, with a clear line of division between them. Depicted simply as an evil monster, Grendel isn’t exactly a fully fleshed-out character, but then again, he doesn’t need to be, as his purpose is to make the reader root for the hero, in this case, Beowulf. Very early in the story, we see a dichotomy being created: Grendel, who is sinister and bloodthirsty, spreading evil and fear among the people, and Beowulf, who fights for the people and wants to protect them. We aren’t familiar with what drives Grendel to commit such despicable acts, nor do we know his motives, as he is simply described as creature of darkness, and that serves as a stark contrast to Beowulf’s motives and actions, which are selfless, to an extent, as he does desire glory. The point is the villain, in this case Grendel, is used merely as a tool to make the hero more approachable and likable, and therefore an emotional connection is forged between the reader and the hero. By making the villain as heinous as possible, the hero is glorified and his actions, even those who might be considered questionable, or even flat out wrong, are justified and made acceptable. The hero and villain often share some of the qualities, such as strength, wisdom and intelligence, which makes their rivalry all the more interesting and realistic, but, there is a key difference in their goals and desires. The hero fights to protect others, even if that means putting himself in harm’s way, which might cost him his life, and the villain feeds off his evil acts and his ultimate goal is his self-satisfaction. But, perhaps there is another reason why we always root for the hero. We all like to think of ourselves as good people, with good character traits, and we tend to see the hero as a perfected image of ourselves, and that’s what makes him so relatable]]>