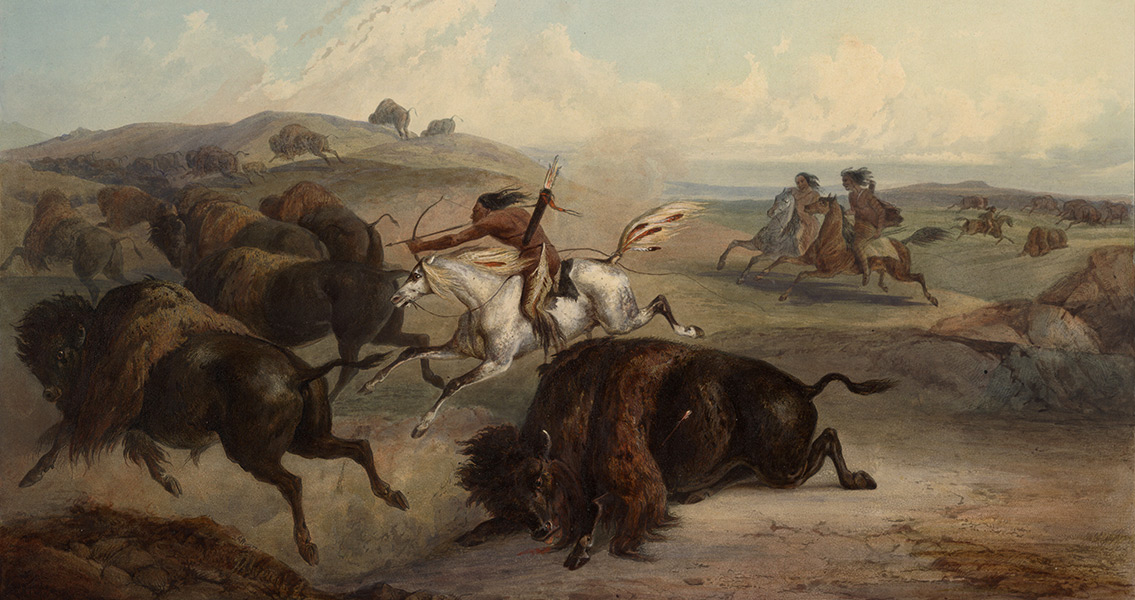 Early American Studies, reveals how the Illinois’ adaptation to the distinctive prairie environment influenced their history. “Although most historians have ignored the bison as a factor in the history of the Illinois and their region, the animals were a central fact of life there,” Morrissey explained. The traditional food eaten by Algonquians near the Great Lakes was beaver. On the Plains of the Midwest, however, beaver were scarce and of low nutritional quality. Bison, on the other hand, were plentiful. Bison hunting gave the Illinois new opportunities and shaped Illinois society in fundamental ways. “A unique economy, pedestrian (i.e., non-equestrian) bison hunting required two things: a large population and much labor,” Morrissey writes. “Because bison could be effectively hunted and processed only in large groups, committing to the bison required (but also enabled) larger villages.” Also, the processing stage was vitally important in the bison economy. As a result, the Illinois needed specialist workers to preserve the meat, render the tallow and tan the hides, Morrissey explains. “The Illinois conducted their bison economy with a gendered division of labor in which women performed the difficult tasks of hide and meat processing, this meant that the Illinois needed women.” The bison economy’s reliance on women for curing meat and creating hides fueled slave raids by the Illinois. In search of new female workers, the Illinois raided their nearby neighbours and enemies, creating a condition of continual war. Morrissey explained that “the Illinois were creating a cycle: more bison exploitation encouraged more raiding, and more violence, and larger settlements and . . . more bison.” When Native Americans came into contact with European explorers, the Illinois fought particularly intense wars. Morrissey argues that the effects of European colonisation on the Illinois cannot be understood independently of their bison economy, such was their dependence on these animals. European diseases began to hit Illinois villages in the 1670s and 1680s when European missionaries and fur traders, especially those specialising in bison hide trading, brought microbes and viruses. Diseases began to affect the Illinois significantly in the early contact period. These diseases put extra strain on the Illinois bison economy. Disease amongst the Illinois led to a shortage in specialist workers. This, in turn, led to increased slave raids and war, stretching the Illinois population to breaking point. “What seems clear is that the bison economy and the colonial changes combined to produce devastation for the Illinois in ways that were unique and particularly intense,” Morrissey argues. For more information: www.muse.jhu.edu Image courtesy of Wikimedia Commons user: Jan Arkesteijn]]>