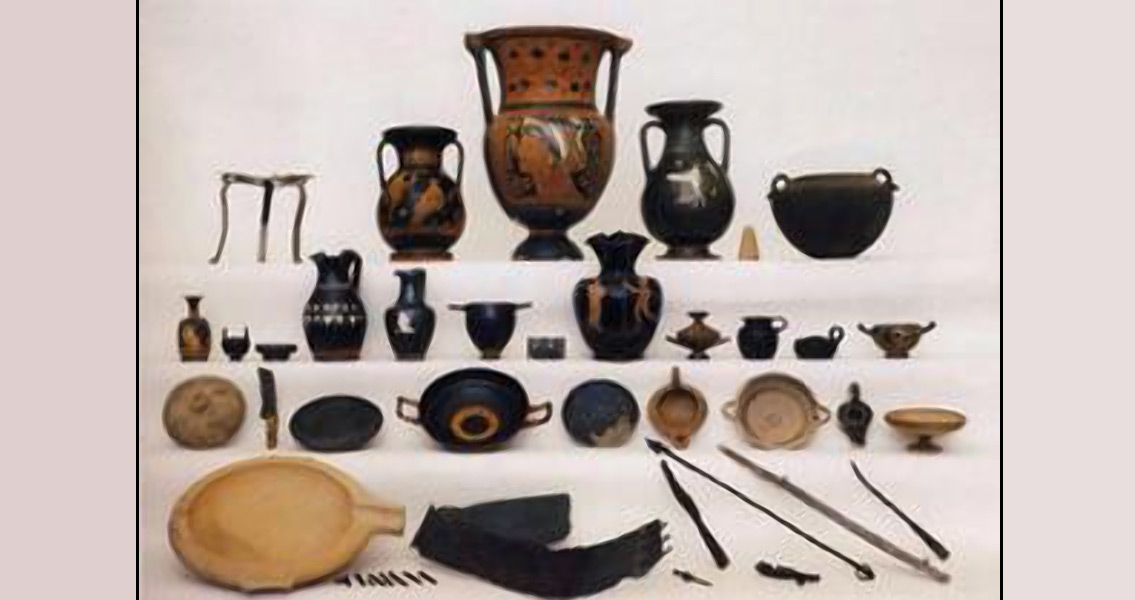 toilets, smaller, less prominent cultures are often consigned to the dimly lit corners of history. New research from the University of Cincinnati has taken a novel approach to this problem by looking into life’s only constant – death. Through analysing ancient bereavement practices from the Central Apulian region in pre-Roman Italy, they have gained an insight into economic and social mobility, military service and even drinking customs in a region and time that had previously been invisible to history. “After going through volumes of collected material, I realized that there was so much more that could be said about what was happening in the development of this particular culture”, said University of Cincinnati Classics Doctoral student Bice Peruzzi, the leader of the research, who recently presented the findings at the 2016 Archaeological Institute of America/Society for Classical Studies Annual Meeting in San Francisco. Analysing the logistics of burials, treatment of the deceased, and contents in graves dating from roughly 525 – 200 BCE, Peruzzi discovered strong evidence of a clear social hierarchy. Men’s tombs from the same period often had metal weaponry lying close to or even across the remains. This has been interpreted as evidence of the commonality of military service in the Central Apulian region in the time period. Peruzzi placed her findings into the broader historical context of the Mediterranean, allowing her to understand the meanings of certain practices, and understand how the lives of the people in the Central Apulian region changed over time. “In spite of having no written history, I was able to distinguish three different periods and then connect them to the larger Mediterranean history to see how their society changed.” An impressive increase in the number of tombs in the region over a period of just fifty years in the fourth century BCE for instance, indicates newer social groups gaining access to ceremonial burials. Evidence suggests that these elaborate burials initially included use of the space for a period of dancing and banqueting by the attendees at the burial ceremony, a practice which had died out by the end of the period under investigation. The First Period that Peruzzi identified in the region, 525 – 350 BCE, unsurprisingly reflected the significant Greek influence over Apulia at the time. Valuable Greek vases and artefacts were found among the contents of many of the tombs. The detailed imagery on some of these artefacts focused specifically on women taking part in every day activities often thought to have been restricted to men, raising interesting questions about the role of women in the society. Along with the increase in the number of tombs in the Second Period (350 – 300 BCE) mentioned above, Peruzzi found evidence of the community’s elites starting to break away and distinguish themselves from others with their burial customs. The burial sites also revealed the onset of urbanisation in the region. “The new growth of specific burial sites to the detriment of others in addition to newly constructed walls surrounding the communities also indicates a general movement toward urbanization in Period 2.” Evidence of entering a time of great transformation can be found in what Peruzzi defines as the Third Period (300-200 BCE). A shift occurred from individual tombs to large chambers sometimes containing whole families. Weaponry was no longer put in graves, while iconography depicting female beauty had disappeared from grave goods, replaced with simple, undecorated ceramics. Meanwhile, the elites had completely abandoned elaborate ceremonial burials, further distinguishing themselves from the other elements of society. Peruzzi’s study provides insights into a period and a region historians and archaeologists have long struggled to understand. Through highlighting changing burial customs she has tracked the onset of social stratification, the emergence of an elite, and the first steps in urbanisation. “From the emergence of new social groups at the end of the 6th century BCE to the gradual urbanization and separation of “ethnic” groups during the 3rd century BCE, the evolution of funerary practices can be successfully used to highlight major transformations in the social organization of Central Apulia communities.” Image courtesy of Source/Riccardi 2003 ]]>