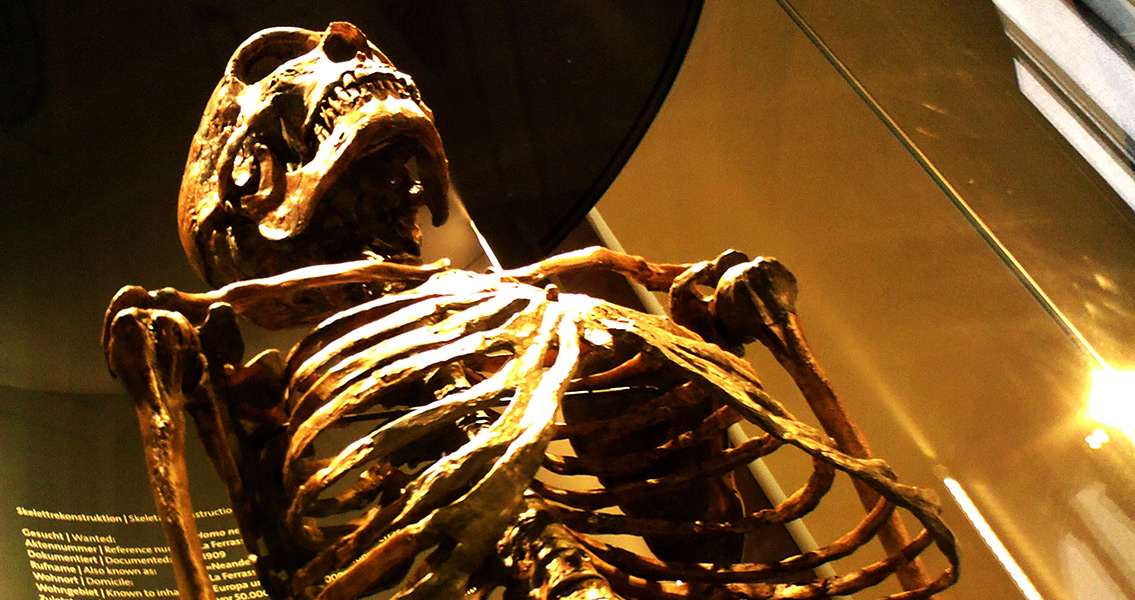 homo sapiens‘ closest extinct relatives. Although bearing many physical similarities to a modern human, there is no doubt that the two species are markedly different in appearance. Neanderthals were shorter and stockier than humans, with significantly wider rib cages and larger pelvises. Published in the July edition of the American Journal of Physical Anthropology, the new study argues that these differences were the result of Neanderthals having to adapt to a high-protein diet. The conclusion was reached using a model the researchers developed to detect dietary stress. Neanderthals lived in Ice-Age Europe, demonstrating remarkable resilience by surviving the brutally cold conditions. The authors of the study, from the Tel-Aviv University (TAU) in Israel, suggest that Neanderthals changed their diets during the coldest periods of the Ice Age, taking between 74% and 85% of their caloric intake from animal fat when carbohydrates weren’t available. However, during winter, large animals shed some of their fat content, a fact which according to the model developed by the researchers would have led to a “significant stressful dietary fat deficit” for the Neanderthals. The authors suggest that this deficit could have been ameliorated by an increased capability to convert protein into energy. “Given that high protein consumption is associated with larger liver and kidneys in animal models, it appears likely that the enlarged inferior section of the Neandertals’ thorax and possibly, in part, also his wide pelvis, represented an adaptation to provide encasement for those enlarged organs.” the authors write, in the abstract to their study. “During harsh Ice-Age winters, carbohydrates were scarce and fat was in limited supply. But large game, the typical prey of the Neanderthal, thrived,” explained study coauthor Miki Ben-Dor, of the Department of Archaeology and Ancient Near Eastern Cultures at TAU, in an interview with the Pakistan Observer. “This situation triggered an evolutionary adaptation to a high-protein diet – an enlarged liver, expanded renal system and their corresponding morphological manifestations. All of these contributed to the Neanderthal evolutionary process.” Ben-Dor continued. The liver is the organ responsible for converting protein into energy, and is therefore likely to enlarge with a high protein diet. Such a diet also increases metabolism, placing a greater demand on the kidneys and bladder to remove toxic urea, and in turn leading to their enlargement. Consequently, the study reasons, Neanderthal pelvises and rib cages had to evolve to house these larger organs. Protein only makes up 30% of the diet for homo sapiens on the other hand, meaning humans have a limited ability to convert protein to energy. Homo sapiens therefore increase their intake of fat and carbohydrates to meet their nutritional needs. ]]>