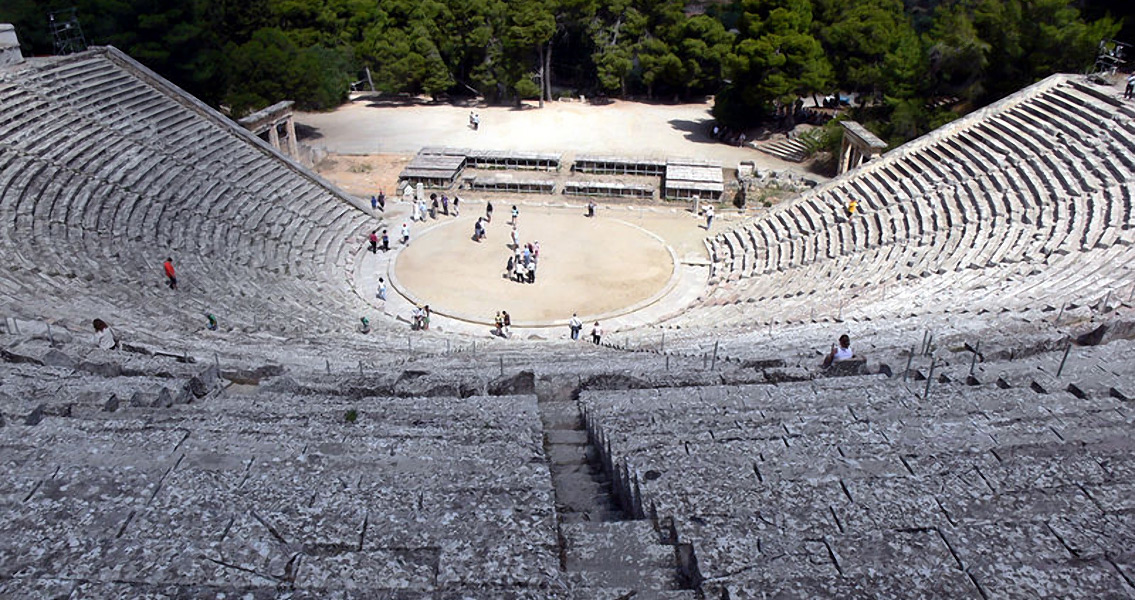 A Short History of Ancient Theatre

Cennarium bring it back to our lives in the digital format. Theatre is here to stay, so let us take a short look at the historical timeline of its development. Primitive Tribal Dance (8500 BCE) Dancing was an integral part of most shamanistic rituals. Body movements naturally accompanied rites of passage and were present in spirit- appeasing performances. Dancing was then primitive, to say the least. It had been synchronised with rhythmic chanting and drumming with simple instruments such as sticks and stones. Shamanism and Ritual (pre-2500 BCE) The shaman is the holy person of a tribe. He communicates with the divine through elaborate rituals. The fact that shamanism foreshadows theatre is evident in the existence of theatrical elements that are present in a shamanistic ritual. These include song, dance, music, characterization, hypnotism, illusion, clowning, and ventriloquism. Rituals were spectacular performances through which humans tried to ensure success in battle, hunting, and life in general. They used various significant artefacts, which now serve as proof for the fact that the first theatrical performances arose from such rituals. One of the first records of a ritual depiction of a myth was as early as 2500 BCE and was performed annually in Egypt. First Recorded Dramatic Production (1887 BCE) The first ever recorded dramatic production is the Egyptian Passion Play that celebrated the mythical and divine king Osiris. The play was held annually for several centuries and it depicts the struggles and triumphs of the Egyptian king and god. As stated by Greek historians, those plays were so realistic that some of the actors consequently died from the severity of their wounds. Dance as Entertainment (1400 BCE) It is not an easy task to determine the exact date of the origin of dance as we know it today. Unfortunately, there are not many artefacts or cave paintings that clearly depict or represent dancing. However, some Egyptian paintings have been found to represent scantily clad girls who danced to music played by seated musicians. The dancing occurred in tombs, as the women tried to bring delight to the deceased and bring them happiness during their next world residence. This is probably one of the earliest representations of dance as entertainment. Dramatic Dance, Myth and Storytelling (800 BCE- 600 BCE) Dancing was definitely a precursor of the theatre as we know it and today it is its integral part. Variations of a dramatic dance included animal imitation, gymnastics and synchronised rhythmic movements. As time went by, people added sound, costumes and masks so as to make the event more spectacular. Since the creation of language, myths and stories were used as devices for learning and entertainment. Oral storytelling was extremely important when it comes to the development of theatre. The epic tales allowed people to elaborate on a certain myth, modify its elements and develop characters in various different ways to create new stories. It is in a similar way that the Greek theatre came to be, through the rites of Dionysus, and it incorporated elements of the aforementioned ecstatic dances.

Greek Theatre (600 BCE- 400 BCE) The cult ceremonies of the fertility and wine god Dionysus are directly connected to the origins of the Greek theatre. These performances included female devotees who danced themselves into a state of trance. Besides dancing, they also ripped apart and devoured the raw flesh of sacrificial animals. The Dionysians then went on to develop a more structured version of theatre. More precisely, it was the Dionysian priest Thespis who first introduced a new element to the Greek theatre. He engaged in a first ever dialogue with the chorus and in that way became the world’s first actor. This event also marks the birth of theatre as we would recognise it today. Tragedians (500 BCE) Theatrical performances and contests became integral parts of the festival which was held in the honour of Dionysus. Unfortunately, there are not many tragedies that survived as full texts, but those that did are truly works of geniuses. Namely, there are three extremely important Greek tragedians: Aeschylus, Sophocles and Euripides. Aeschylus – He added a second actor and in that way increased the potential for drama. He wrote around 80 plays, out of which 7 are preserved. He won the prize for the best tragedy in 484 BCE. Sophocles – He added a third actor, thus expanding the possibilities for achieving an even greater dramatical effect. He defeated Aeschylus in 468 BCE when he won the prize for best tragedy. While Aeschylus dealt with topics of great public interest, Sophocles was concentrated on personal interaction between characters. Euripides – He introduced an unconventional view of the Greek myth. He represented mythological characters as having human frailties and by doing so, he influenced the later schools of tragic drama. The Beginning of Greek Comedy (500 BCE) An annual comedy competition started taking place in Athens in 486 BCE. Unfortunately, only one comedy author’s work was saved, namely, Aristophanes: a comedy genius who won the prize many times. Most of his plays heavily rely on the devices that are central to the ongoing tradition of comedy. He satirised basic character flaws while putting the characters in a ridiculous setting. A good example of such a play is The Frogs, which was written mainly to satirise Euripides. Architecture At first, the Greeks sat on hillsides to watch the performance on a temporary wooden stage. In 400 BCE the “venue” got an upgrade in the form of a stone auditorium. This is known today as the theatre of Dionysus and represents a reconstruction from the Roman period. The best example of a classical Greek theatre is Epidaurus, which was built in around 340 BCE. Roman Comedy (300 BCE- 200 BCE) It is well known that Greece heavily influenced Rome in most cultural matters, but this is especially true when it comes to theatre. In the decades before and after 200 BCE, there were two Roman comedy writers who achieved lasting fame. One of them was named Plautus and is famous for his body of work that resembled entertainment similar to a farce. The other one is Terence and he was mostly known for his comedy of manners. However, neither of them ever invented a single plot. They were all based on Greek drama, while the setting of all Terence’s plays was actually Athens. Roman plays were held as a part of a broader event: the Roman games (which were essentially a harvest festival). Consequently, the audience was scarce and inattentive. The main events were chariot races and boxing matches, while the clowns and plays were more of a sideshow act. What is also interesting is the fact that the Roman circus and gladiators were much more popular than the theatre. Romans found greater excitement in the gladiator’s’ arena while watching a fight to the death, than in the theatre. Senecan Tragedies The date of these writings cannot be exactly pinpointed due to the lack of any ancient references. According to a nineteenth-century German scholar, Friedrich Leo, Seneca’s tragedies were written essentially for recitation. Others believe that the tragedies were in fact performed during Seneca’s lifetime. Unfortunately, we cannot be certain solely on the basis of the existing evidence. Nevertheless, Senecan tragedies are of great value. They were written in blank verse and were not all reworks of Greek dramatists. Senecan tragedies include Hercules Hercules, Furens, Troades, Phoenissae, Phaedra, Thyestes, Hercules Oetaeus, Agamemnon, Oedipus, Medea and Octavia. Seneca’s works heavily influenced medieval tragic drama and still remain of great value. And Then There was Silence With the rise of Christianity and the fall of the Roman Empire many festivals were abated. The last records of Roman theatre could be associated within the Byzantine Empire. When the seat of Roman power shifted to the Northern Roman Empire, so did the festivities. Various dances, including a form of ballet, together with pantomime and recitations from comedies and dances became increasingly popular. Unfortunately, by 400 CE the theatre was completely banished because of its association with the pagan gods, the lack of moral constraints and the ridicule of the church by the mimes. After the collapse of the Roman Empire and during the upheaval in Europe, the theatre did not play any significant roles because it was suppressed by the church and reduced to folk tales. It reemerged in the late tenth century when the Christians introduced dramatic elements into the Easter liturgy to make it more interesting and captivating. These dramatic integrations led to the development of the Medieval Christian drama. It is worth noting that this article only covers the development of the Western theatre. The Eastern theatre was unimpacted by the Christian censorship and continued its steady course of development.]]>