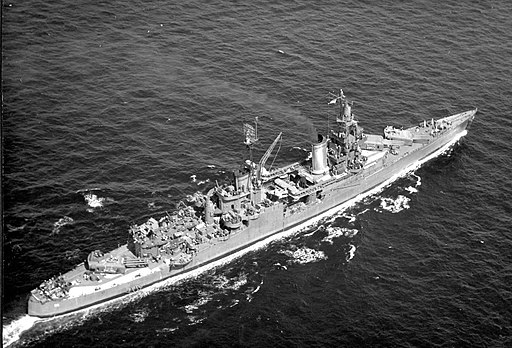 USS Indianapolis Shipwreck Discovered 72 years after its sinking, the wreckage of the USS Indianapolis has been discovered 18,000 feet beneath the surface of the Philippine Sea, according to the New York Times. In July 1945, in the final months of the Second World War, the USS Indianapolis was sunk by a Japanese torpedo, as it returned from a secret mission to deliver parts that were used in the atomic bomb dropped on Hiroshima. The ship’s sinking was the worst loss of life in the history of the US Navy. Of the 1,196 crew on board, just 316 were rescued. Although somewhere between 800 and 900 people escaped the sinking ship, no distress signal was sent. When the survivors were found by chance four days later in shark infested waters, just a fraction were left alive. On Saturday 19th September, a civilian team led by Paul G. Allen, the co-founder of Microsoft, announced that it had found unmistakable wreckage of the Indianapolis. They had been directed to the site by new research from a naval historian which determined a specific region of the ocean where the ship had been sited the night before its destruction. “To be able to honour the brave men of the USS Indianapolis and their families through the discovery of a ship that played such a significant role during World War Two is truly humbling,” Allen told the BBC. Ancient Pompeii’s Water Supply was Poisonous New research claims that the water transported through the pipelines of the ancient Roman city of Pompeii was probably poisonous on a scale that would have likely led to diarrhea, vomiting and liver and kidney damage for anyone who drank it. Kaare Lund, a chemist from the Southern University of Denmark (SDU), analysed water pipes from Pompeii and found high levels of the toxic element antimony, which he believes may have poisoned the drinking water. Antimony is acutely toxic, meaning it causes a quick reaction in anyone who consumes it. According to a statement from SDU, the element is particularly irritating to the bowels, and the reactions are excessive vomiting and diarrhea that can lead to dehydration. In severe cases it can also affect the liver and kidneys and, in the worst-case scenario, can cause cardiac arrest. Pompeii’s location, close to Mount Vesuvius, likely meant the concentration of antimony was higher there than elsewhere in the Roman Empire, as the toxic chemical element naturally occurs in groundwater close to volcanoes. Lund and colleagues’ findings have been published in the journal Toxicology Letters. Hannibal’s defeat and the rise of Rome written in coins Chemical analysis of Roman coins has found that the defeat of Hannibal led to a flood of wealth through the Empire from the silver mines of Spain. According to scientists, the discovery tracks Rome’s transition from regional power to empire. Regarded as a key event in European history, the Second Punic War saw Hannibal lead his formidable Carthaginian army across the Alps in 218 BCE in a failed assault on Rome. Hannibal’s defeat saw the Romans conquer the Iberian Peninsula, with the Romans slowly gaining control over the region’s lucrative silver mines circa 211 BCE. War reparations from Carthage combined with the revenue taken from the Spanish mines ultimately funded Rome’s rapid territorial expansion. The new geochemical analysis has now provided clear proof of the importance of the Spanish silver in funding Roman conquest. A group of scientists based in Germany and Denmark and led by Prof Fleur Kemmers and Dr Katrin Westner (Institute for Archaeological Sciences, Goethe University, Frankfurt) analysed 70 Roman coins dating from 310-300 BCE to 101 BCE, the period surrounding the Second Punic War. Using Mass Spectrometry, the team determined that the lead in the coins from after 209 BCE had distinctive isotope signatures which identified them as presumably originating from Spain. “Before the war we find that the Roman coins are made of silver from the same sources as the coinage issued by Greek cities in Italy and Sicily2. In other words the lead isotope signatures of the coins correspond to those of silver ores and metallurgical products from the Aegean region”, said Katrin Westner. “But the defeat of Carthage led to huge reparation payments to Rome, as well as Rome gaining high amounts of booty and ownership of the rich Spanish silver mines. From 209 B.C. we see that the majority of Roman coins show geochemical signatures typical for Iberian silver”. “This massive influx of Iberian silver significantly changed Rome’s economy, allowing it to become the superpower of its day. We know this from the histories of Livy and Polybius and others, but our work gives contemporary scientific proof of the rise of Rome. What our work shows is that the defeat of Hannibal and the rise of Rome is written in the coins of the Roman Empire.” ]]>