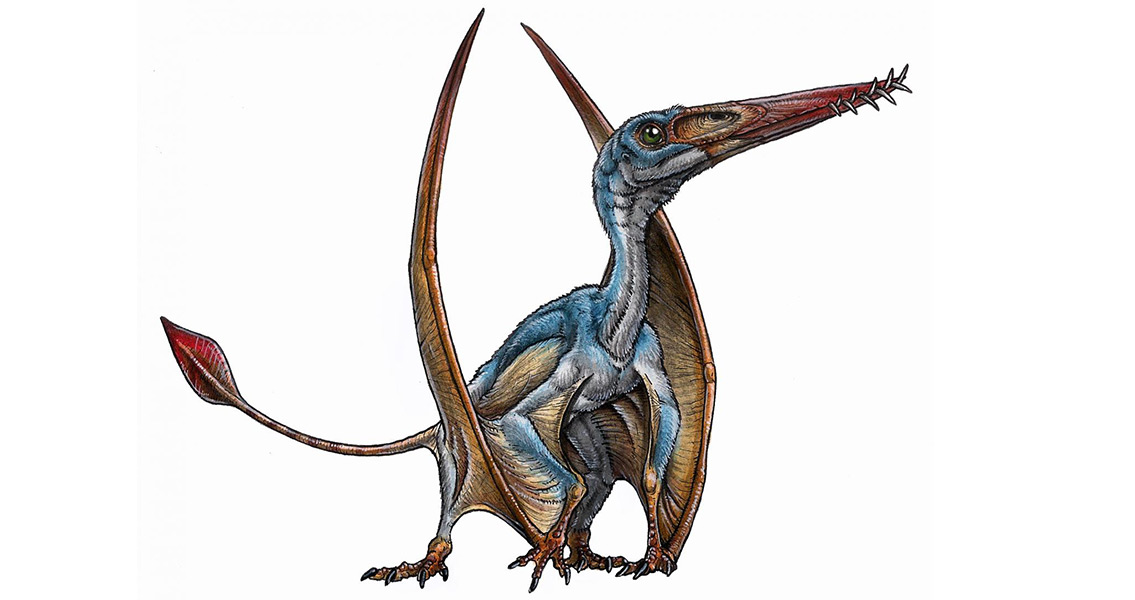 Allkauren koi by the researchers behind the discovery. Preserved in remarkably good condition, the skull remains have revealed new information about the evolution of the braincase of pterodactyloids, a major suborder of Pterosaurs. The name Pterosaur comes from the Greek for ‘wing lizards’. These spectacular creatures dominated the skies during the Jurassic and Cretaceous periods, and included the largest vertebrate ever known to fly: Quetzalcoatlus from the late Cretaceous period. Members of the long extinct group were incredibly diverse, ranging from the size of a sparrow to the size of an airplane. Intriguingly however, Pterosaurs evolved flight separately from bats and birds; they are not closely related to either creature. The group had extraordinary adaptations enabling them to take to the skies: pneumatic bones drastically reducing their weight and an elongated digit supporting a wing membrane. The neuroanatomy of Pterosaurs has remained shrouded in mystery however, the consequence of a paucity of three dimensionally preserved remains. It is this that has afforded the latest discovery such importance, giving new insight into the intermediate forms of Pterosaurs. The study describing Allkauren koi, published in the journal PeerJ, provides new information about the origin, tempo and mode of evolution in the Pterosaur group. Allkauren koi has been named from the language of the Tehuelche, the group of indigenous peoples of Patagonia. ‘All’ comes from the Tehuelche word for ‘brain’, while ‘kauren’ is their word for ‘ancient’. It joins the over 150 other species of Pterosaur discovered so far. The remains, including the amazingly preserved, uncrushed braincase, were discovered in northern central Chubut Province, Patagonia Argentina. Through computer tomography, the researchers have been able to study the creature’s cranial anatomy, observing in three dimensions the cranial endocast and the inner ear. From this starting point a comprehensive phylogenetic analysis of the Pterosaur group was performed, one which “fills an important gap”, according to the study. “Allkaruen, from the middle lower Jurassic limit, shows an intermediate state in the brain evolution of pterosaurs and their adaptations to the aerial environment”, said Dr. Diego Poll, a member of the research team, in a PeerJ press release. “As a result, this research makes an important contribution to the understanding of the evolution of all of pterosaurs.” ]]>