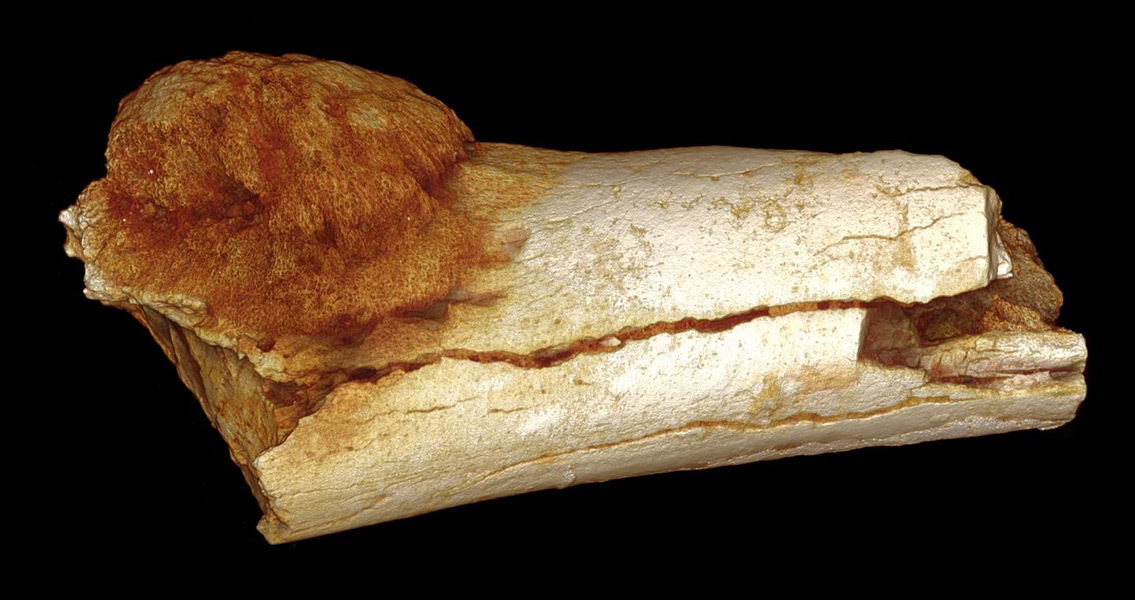 Earliest Human Cancer Pushes its Origins Back Over a Million Years

South African Journal of Science, an ancient cancer case and an ancient tumour case are detailed. Until now, the oldest documented incidence of a tumour had been discovered on the 120,000 year old remains of a Neanderthal. The two new studies suggest that cancer and tumours were in fact around well over a million years ago. A 1.7 million year old foot bone discovered in Swartrans, South Africa, bore definitive evidence of malignant cancer. Although the species to which the foot belongs remains unclear, the researchers behind the first paper say it is clearly that of a hominin or bipedal human relative. The accompanying paper identifies the oldest tumour ever found in the human fossil record. A benign neoplasm was found in the vertebrate of Karabo, the close to two million year old remains of an Australopithecus sediba child discovered at the site of Malapa. “Modern medicine tends to assume that cancers and tumours in humans are diseases caused by modern lifestyles and environments.” said Edward Odes, a Wits doctoral candidate and lead author of the cancer paper, and co-author on the tumour paper. “Our studies show the origins of these diseases occurred in our ancient relatives millions of years before modern industrial societies existed”. In the case of the foot bone, the cancer: an agressive osteosarcoma, was discovered on the metatarsal. It’s a form of cancer most commonly found in younger humans, which if left untreated proves fatal. “Due to its preservation, we don’t know whether the single cancerous foot bone belongs to an adult or child, nor whether the cancer caused the death of this individual, but we can tell this would have affected the individual’s ability to walk or run”, explained Dr Bernard Zipfel, a Wits Scientist and expert on the feet and movement of early human relatives. Both discoveries further complicate the picture we have of the causes and history of cancer and tumours. The diseases are typically linked to aspects of modern life, such as our diet, urban living and background radiation. Prevailing thought also suggests that the reason cancer and tumours seem to exhibit themselves more often now is due to increasing life expectancies. However, the tumour discovered on the child’s vertebrate is one associated with adulthood. Indeed, it is the first evidence of the disease in a young individual in the whole of the fossil record. Professor Lee Berger, the leader of the Malapa project and an author on both papers, highlighted just how much of a game changer in the study of oncology both discoveries could prove to be. “…not only has there been an assumption that these sorts of cancers and tumours are diseases of modernity, which these fossils clearly demonstrate they are not, but that we as modern humans exhibit them as a consequence of living longer, yet this rare tumour is found in a young child. The history of these types of tumours and cancers is clearly more complex than previously thought”. In both studies, cutting edge imaging technology was used to diagnose the incidences of disease. The results show the potential of modern technology to not only further our understanding of our ancient human relatives, but also the origin and development of modern diseases. “This is another good example of how the modern clinical sciences and the science of palaeoanthropology are working together in South Africa and with international collaborators to advance our understanding of diseases in both the past and the present.” said Dr Jacqueline Smilg, a radiologist based at Charlotte Maxeke Hospital, who is an author on both papers and was involved in the clinical diagnoses. Image courtesy of Patrick Randolph-Quinney (UCLAN)]]>